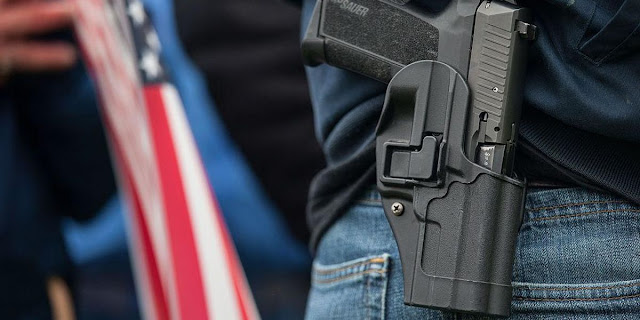 The Texas House of Representatives has approved a bill allowing adults to carry guns without a permit.
The lower chamber passed H.B. 1927 by a vote of 84-56 on Thursday. Under the legislation, anyone over the age of 21 and not otherwise prohibited from owning a firearm will be allowed to carry one.
Texas law currently requires individuals to obtain licenses to carry handguns either openly or concealed.
The vote was largely along party lines, according to The Dallas Morning News, though at least seven Democrats backed the measure while one Republican who opposed it didn’t vote.
State Rep. Matt Schaffer (R), the bill’s sponsor, said that the measure should be called “constitutional carry,” according to the newspaper.
“Law-abiding citizens need the ability to protect themselves and their families,” Schaffer said.
Other GOP-led states are pushing similar legislation. Iowa Gov. Kim Reynolds (R) signed a bill earlier this month that would allow people to purchase and carry handguns without a permit.
Tennessee Gov. Bill Lee (R) also signed legislation allowing people aged 21 and older to carry handguns without a permit.
Meanwhile, Democrats have been pushing for gun safety measures in an effort to tamp down on the epidemic of gun violence amid a string of mass shootings, including in Atlanta and Boulder, Colo.
Earlier this month, President Biden rolled out a series of executive actions he plans on taking to address gun violence, and he has called on Congress to tackle the issue head-on.
Texas