Texas hires Chris Beard from Texas Tech as next coach 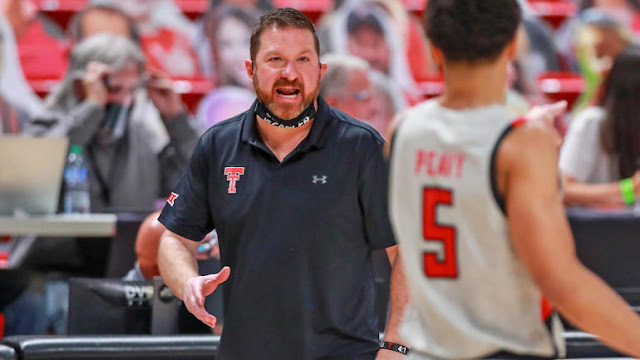 Texas is hiring Texas Tech coach Chris Beard to the same position for the Longhorns, according to CBS Sports' Matt Norlander. Beard will succeed Shaka Smart as the Texas coach after Smart left to take the Marquette job last month.
Beard is a University of Texas alumnus who has long been linked to the Longhorns as his star steadily brightened in recent years first with Little Rock and most recently with Texas Tech. The news of Beard's move across the state comes on the same day his contractual buyout for another Big 12 program dropped from $5 million to $4 million.
Beard's coaching career has been short but his lack of experience is compensated by his immense success turning programs around in a hurry. His first head gig came at Little Rock where he won 30 games in 2015-16, taking the program to a regular-season and postseason conference championship as well as its second NCAA Tournament appearance in more than two decades. He then left after one season to take the same job at Texas Tech.
In five seasons at Texas Tech, Beard led the Red Raiders to a 112-55 record with three appearances out of four NCAA Tournaments held during that span. Texas Tech advanced to the national championship game in 2019 but ultimately finished as runner-up. It also had a second Elite Eight berth in that span.
Stadium's Jeff Goodman first reported Beard's hiring.
For Beard, it's a full-circle career move as he returns to his alma mater. The University of Texas University is where he got his coaching start in the early 1990s as a graduate assistant. And Texas is the state where he was groomed for this gig, with coaching stops as an assistant at Abilene Christian, North Texas, Incarnate Word and Texas Tech. He also served as head coach at Fort Scott Community College and at Seminole State Junior College, familiarizing himself with the region that makes him primed to thrive in Austin, Texas, for the Longhorns.
Local