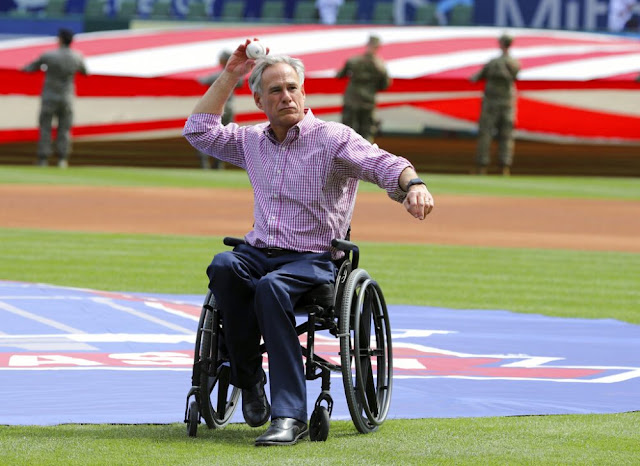 Texas Gov. Greg Abbott (R) on Monday said he wouldn't throw out the first pitch at the Texas Rangers’ home opening game due to MLB's decision to move the All-Star Game out of Georgia in response to a recently passed voting law.
“I was looking forward to throwing out the first pitch at the Texas Rangers' home opening game until @MLB adopted what has turned out to be a false narrative about Georgia's election law reforms,” Abbott wrote on Twitter. “It is shameful that America's pastime is being influenced by partisan politics.”
In a letter to Neil Leibman, president and COO of the Texas Rangers, Abbott wrote he would not be taking part in any events held by the MLB and said Texas would not seek to host any special MLB events such as the All-Star Game.
"This decision does not diminish the deep respect I have for the Texas Rangers baseball organization, which is outstanding from top to bottom. I wish the team great success this season," Abbott added.
Abbott's decision comes as the Texas Legislature advances a bill that has been compared to Georgia's recently passed election law. The bill would limit polling place hours and would impose a ban on ballot drop boxes, The New York Times reported. The bill would also prohibit anyone except the voter who filled out their ballot from dropping it in a mailbox or delivering it to an elections official.
American Airlines, which is headquartered in Fort Worth, Texas, said in a statement that it was “strongly opposed” to the Texas voting bill and "others like it," the Times notes.
David Becker, executive director and founder of the Center for Election Innovation and Research, told the Times that the new laws would make voting less secure, despite Texas state lawmakers arguing the bill is necessary to strengthen election security. Becker said this bill would encourage people who would otherwise vote early or through mail-in ballots to vote on Election Day.
MLB announced on Friday that it would be moving the All-Star Game out of Georgia in protest of the state's voting laws, which critics have said will disproportionately limit access to voting for Black Americans.
"Major League Baseball fundamentally supports voting rights for all Americans and opposes restrictions to the ballot box,” MLB Commissioner Rob Manfred said at the time of the announcement.
The sports league's decision drew backlash from Republican figures including Georgia Gov. Brian Kemp, former President Trump and Senate Minority Leader Mitch McConnell (R-Ky.). Democratic leaders in Georgia such as Stacey Abrams and Sen. Raphael Warnock, who are outspoken against the law, have also expressed dismay at MLB's decision.
Kemp shot back at MLB soon after the announcement was made accusing the organization of caving in to "fear, political opportunism, and liberal lies."
Texas