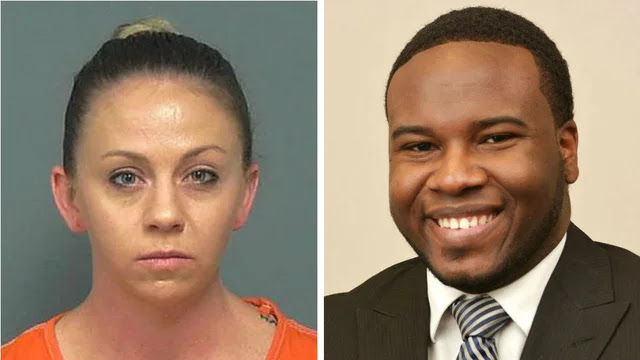 A Texas court is slated to hear oral arguments Tuesday over the appeal of a white police officer who was convicted of murder and sentenced to prison for fatally shooting her Black neighbor, The Associated Press reports.
Attorneys for Amber Guyger, a former Dallas police officer, will argue that the evidence presented in the trial did not sufficiently prove the shooting of Botham Jean, Guyger's neighbor, was murder. Guyger is serving a 10-year sentence, according to AP.
On the night of the shooting, Guyger mistakenly entered Jean's apartment thinking it was her own. She shot him thinking he was a burglar when she found the door open after returning from work.
Guyger's appeal is centered on the notion that her mistaking Jean's apartment for her own, which was one floor below him, was reasonable and did not amount to murder.
"The evidence was legally insufficient to prove beyond reasonable doubt that Guyger committed murder," Guyger's defense team wrote in the appeal. "Although she intentionally and knowingly caused Jean’s death, she had the right to act in deadly force in self-defense since her belief that deadly force was immediately necessary was reasonable under the circumstances."
Upon moving into the apartment complex, she had heard about "a lot of robberies and a lot of break-ins in that area," she said, according to the court filing.
The prosecutors counter-argued that "she intended to kill Botham, and she shot him in the chest while he was sitting on his own couch eating ice cream."
They added, "She committed unjustified murder."
The verdict from the appeal is expected to come at a later date.
Texas