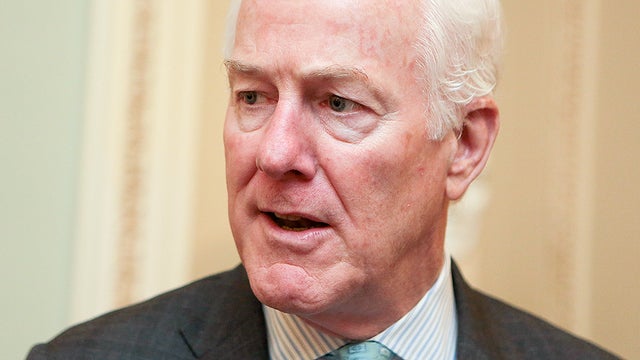 Senate Republicans on Wednesday afternoon stuck with their conference's internal earmark ban, but that won’t prevent those who want funding for home-state projects from requesting it.
After more than a week of tense debate, Senate Republicans opted not to hold a vote to uphold or overturn the prohibition during the closed-door meeting, according to several senators present.
"We just maintain the status quo," said Texas Sen. John Cornyn.
The earmark prohibition — which GOP senators voted to make “permanent” in their rules two years ago — isn’t binding, meaning any Republican who wants to request earmarks likely won’t face repercussions for doing so.
"The rules, as I understand it, are not binding on individual members. So I think we'll see what people do and what people will refrain," Cornyn said.
The conference also adopted a new nonbinding rule that would require any increase in the statutory debt limit to be offset with corresponding spending cuts "or meaningful structural reforms in spending," according to Ted Cruz, R-Texas. Congress will have to tackle the debt ceiling later this year or the Treasury Department will run out of borrowing authority to meet federal obligations.
Cornyn called that new provision “aspirational,” while Senate Appropriations ranking member Richard C. Shelby said the debt limit amendment, authored by Cruz and Rick Scott, R-Fla., is “probably meaningless.”
Republican Conference Chairman John Barrasso of Wyoming and Nebraska’s Ben Sasse said ahead of the closed-door meeting they expected the ban would remain in party rules. Neither said that would prevent Republicans who want earmarks from requesting them, though Sasse said he was still debating that with some of his colleague ahead of the meeting.
“There's a number of us wrestling about some of that and that's a big part of the [meeting],” said Sasse, who authored the 2019 amendment to add the permanent ban to GOP rules.
Republican earmark supporters have said for weeks they plan to request "congressionally directed spending" during the upcoming fiscal 2022 appropriations process regardless of what happens with the conference prohibition on earmarking.
“We don’t have to approve anything,” Shelby, R-Ala., said Wednesday before the meeting. “They’re allowed under the rules. They’ve never been disallowed. That’s not a rule. That’s a statement of the caucus. It doesn’t bind anybody."
Maine’s Susan Collins, the top Republican on the Transportation-HUD spending panel, is among those who plan to request earmarks during the appropriations process. She said she'll only back projects if they are for “public purposes” and are subject to “certain guidelines.”
Republican Conference rules have said since the 115th Congress that “no Member shall request” a spending, tax or tariff-related earmark as defined under Senate rules. But the rules also say that “[no] action” by the conference “shall by binding in any way on members” during Senate votes.
The discussion about keeping a ban in party rules while simultaneously allowing any Senate Republicans who want to earmark to do so has irked several GOP senators. A group of 15 Republicans released a letter this week urging their colleagues to refrain from the practice.
“We will not participate in an inherently wasteful spending practice that is prone to serious abuse,” wrote the group that included Cornyn Utah’s Mitt Romney and Florida’s Marco Rubio.
Senate Republicans' decision differs from their House colleagues, who voted in March to adopt a rule change from Alabama's Mike D. Rogers that allows their conference members to request earmarks under House Democrats' new system.
The new rule requires House Republicans to state in writing why an earmark is an “appropriate use of taxpayer funds” and says House GOP leaders “shall not give consideration to a member’s seniority, committee assignments, or position in the elected leadership when facilitating a request.”
Any House member requesting funding for projects in their district must also follow the guardrails and transparency mechanisms House Appropriations Chair Rosa DeLauro, D-Conn., announced earlier this year.
Senate Appropriations Chairman Patrick J. Leahy, D-Vt., hasn’t yet said exactly how the earmarks process will work in that chamber, but has said if Republicans participate they’ll be given half of the earmark funds.
Earmark proponents within the Senate Republican Conference have argued that if their members sit out the process, they’ll be giving up money that could benefit their constituents.
National