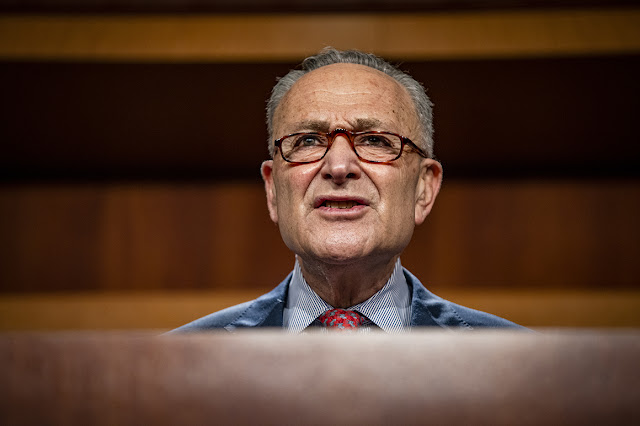 Sen. Charles Schumer (D-N.Y.) is asking Democrats to look for GOP dance partners, both as a defense for attacks next year that his party is unwilling to work with Republicans, and as a step toward possibly limiting the filibuster.
The initial reason for seeking bipartisan opportunities is next year’s midterms.
Democrats want to bolster their defenses for the coming GOP attacks that voters should deliver a GOP majority in the House or Senate as a check on President Biden, and to punish Democrats for not working on a bipartisan basis.
But the effort is also a way to convince Democratic senators to agree to reform the filibuster.
The thinking is that if Republicans show they aren’t interested in working with Democrats, it will help the case within the Senate Democratic Conference to reform the filibuster, which requires most legislation to win 60 votes to move forward in a chamber where there are only 50 Democratic votes.
“Schumer is just now laying out how we want to go forward,” said one Democratic senator. “Some members of the caucus, a considerable number, they want to understand the extent of Republican obstruction to justify any action taken on the filibuster.
“All of this is about bringing the caucus back together so eventually 50 people in the room can reach a decision,” the source said.
A second Democratic senator confirmed there is consensus within the conference about the need to probe the extent of GOP obstruction before moving forward on filibuster reform.
Sen. Angus King (Maine), an independent who caucuses with Democrats, declined to comment on Senate Democrats’ first in-person meeting this year, which took place Tuesday, but confirmed that he is one of those in the caucus who would prefer to see how far Republicans are willing to compromise before embarking with further talks on reforming the filibuster.
“That’s my feeling. I’d much rather do things in a bipartisan way,” he said, adding that whether things get done will be up to Republican colleagues.
“It’s up to them,” he said, citing an op-ed he wrote for The Washington Post last month, entitled: “What happens to the filibuster depends on how Republicans play their hand.”
In the op-ed, King wrote that if “the minority hangs together and regularly uses this power to block any and all initiatives of the majority (and their president), supporting the continuation of the rule becomes harder and harder to justify.”
Schumer also wants to protect Democrats from attacks that they rammed a far-left agenda through Congress without any GOP support.
A Senate GOP leadership source confirmed that the National Republican Senatorial Committee will hit vulnerable Democratic incumbents next year for what they say is Schumer and Speaker Nancy Pelosi’s (D-Calif.) partisan agenda.
“We’ll be asking [Sen.] Mark Kelly [D-Ariz.], in a pivotal state, we’ll be asking Sen. Maggie Hassan [D-N.H.], in a competitive state, why they did this. Not to mention Georgia,” said the leadership source. “The Democrats need to ease up.”
Senate Minority Leader Mitch McConnell (R-Ky.) is already previewing the attacks his party will roll out in 2022 to win back control of the Senate and House.
He has repeatedly hit Democrats for passing the $1.9 trillion American Rescue Plan without a single GOP vote in either chamber and their plans to use budget reconciliation to pass a massive infrastructure package through the Senate with a simple majority vote. The budget rules allow Democrats to avoid the filibuster, which can be used a limited number of times and the legislation must meet specific rules to qualify.
“Chuck Schumer spoke more about bipartisan today than I’ve ever heard him speak about,” Sen. Joe Manchin (D-W.Va.), a key centrist, said after Tuesday’s meeting.
“He wants — ‘Everything we’re doing, we’ll try to do bipartisan. Let’s work on bipartisan, reach out to your friends,’ ” Manchin said, summarizing Schumer’s guidance to the caucus.
Sen. Chris Coons (D-Del.), another moderate and a close Biden ally, said, “Sen. Schumer is encouraging Democrats to find partners, finalize bipartisan bill ideas and get them moving to the floor.”
Coons cited a water infrastructure bill slated to come to the Senate floor as soon as next week, legislation to improve competitiveness with China, and limited proposals to expand background checks as measures that could secure bipartisan support in the coming weeks.
He cited proposals such as one to facilitate the issuance of emergency rescue protection orders, which would make it more difficult for people with mental illness or other risk factors to obtain firearms, and another to require law enforcement be notified if a person seeking to purchase a firearm lies on an application form.
Schumer claimed a small victory Wednesday when the Senate voted to proceed to a bill that would crack down on hate crimes against Asian Americans.
“We’re very pleased that the Senate just took an overwhelming vote, 92-6, to move forward with legislation to fight the surge of constant Asian violence across our country in the wake of the COVID-19 pandemic,” he said.
National