Say it ain’t so, Rob 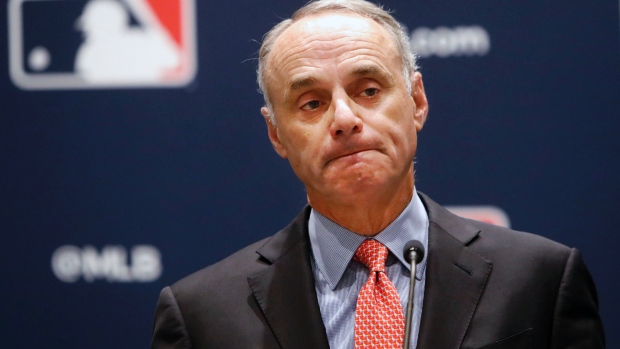 Rob Manfred, the commissioner of Major League Baseball, has managed to get to the left of Stacey Abrams on Georgia’s election law.
Even Abrams, who still claims she is the rightful governor of the state and is a constant fount of hysteria and misinformation about its voting rules, has said she opposes boycotts of the state and is “disappointed” by MLB’s decision to pull the All-Star Game from Atlanta this summer.
If MLB is suddenly passionate about the intricacies of the nation’s voting laws, it could have provided one specific alleged outrage in Georgia that caused it to make this move. Was it the newly extended voting hours? The decision to keep drop boxes permanently after their adoption on an emergency basis last year, only not at permanent pandemic levels? The requirement that voters write a driver’s license number or other identifier on absentee-ballot envelopes (when Ohio, the state where the last All-Star Game was played, has a similar rule)? The prohibition on people giving water within 150 feet of a polling station to people standing in line, although drinks can be given to poll workers to distribute and water stations made generally available?
We could go on. MLB stuck to gauzy generalities in its statement, one assumes, because citing the specifics of the law with any accuracy would expose its decision as being completely unwarranted. MLB moving the Summer Classic has all the hallmarks of a craven attempt to curry favor with fashionable opinion, after the president of the United States encouraged it to do so in an ESPN interview full of falsehoods about Georgia.
Certainly there is no consistency here. MLB had no problem a few years ago forging an agreement with the Chinese tech company, Tencent, to stream its games in China, where early-voting hours are famously restrictive. It’s been happy to have a cooperative relationship with Cuba, where ballot drop boxes are not nearly as available as one would hope. It allows the Yankees and Mets to play in New York, and makes its headquarters there, when New York doesn’t have no-excuse absentee voting and Georgia does, it offers fewer days of early voting than Georgia, and it has its own law against giving food and drink to voters.
Indeed, MLB is going to have to take some care to ensure that it finds a new state for the All-Star Game that doesn’t have more restrictive rules than Georgia.
Perversely, MLB’s decision will hurt the very people the league is purporting to support. The game was going to bring economic activity to Atlanta, which is a majority-black city. It would have meant money for hotel and restaurant employees, hot-dog and T-shirt vendors, and other shift workers. The Atlanta Braves, in an unusual show of disagreement with the league office, pronounced themselves “deeply disappointed” that “businesses, employees, and fans in Georgia are the victims of this decision.”
Baseball long ago lost its overwhelming hold on the nation’s imagination, but it was seemingly a reflection of its vestigial status as the National Pastime that it avoided contention over the national anthem and steered clear of politics more than other major sports. Not anymore. It has proved that it is willing to pander like any other woke corporation and has gotten caught up in — in fact, now is a corporate leader in — the ill-informed and mendacious campaign against Georgia.
Say it ain’t so, Mr. Manfred.
Opinion