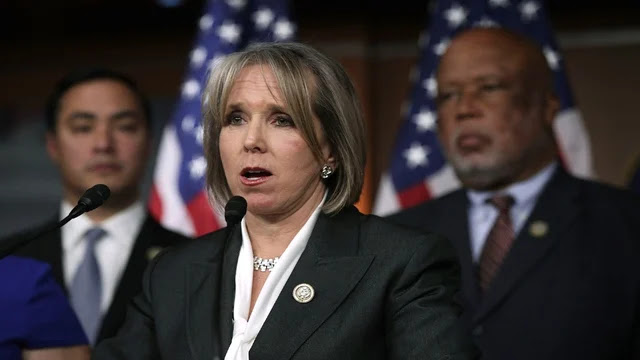 New Mexico Gov. Michelle Lujan Grisham (D) has reportedly reached a settlement with a former spokesperson for her 2018 gubernatorial campaign who accused her of unwanted sexual behavior.
The settlement was first reported by The Albuquerque Journal on Monday, which reported that her campaign made at least $62,500 in payments to a law firm representing James Hallinan.
In December 2019, Hallinan accused the governor of pouring water on his crotch and grabbing it through his clothes in front of other staffers during a campaign meeting in 2018.
Rachel Berlin Benjamin, who represents Hallinan, told The Hill “Governor Lujan Grisham and Mr. Hallinan have resolved any differences or issues to their satisfaction. I am not able to provide any further information.”
The Journal reported that Lujan Grisham’s campaign made five monthly payments of $12,500 from November through March which are listed as legal expenses.
Jared Leopold, a spokesperson for Lujan Grisham’s campaign, told the Journal that the payments resolve “numerous dubious and disputed potential claims made by Mr. Hallinan arising from his employment in 2018 with the campaign organization and his subsequent search for employment.”
He added that Lujan Grisham and her campaign “strenuously deny” the allegations, and entered the settlement to avoid “continuing distraction and significant expense of possible litigation.”
Lujan Grisham’s press secretary Nora Meyers Sackett told Axios “the state doesn’t have any comment as this is not official state business. Our office maintains there is no merit to the allegations.”
High Plains Pundit has reached out to Lujan Grisham’s office and campaign for comment.
The settlement comes as fellow Democratic Gov. Andrew Cuomo of New York battles allegations of sexual misconduct of his own. Lujan Grisham told The Washington Post in early March that the allegations are troubling and needed to be taken seriously.
Lujan Grisham is the chair of the Democratic Governors Association (DGA) and was at one point under consideration to join President Biden’s cabinet.
The DGA didn’t return High Plains Pundit’s request for comment, but the Republican Governor’s Association slammed the settlement, and called on Lujan Grisham to apologize
“The payments certainly suggest that there must be some truth to the story, and Governor Lujan Grisham should publicly apologize to her victim for her behavior,”  Republican Governors Association spokesman Will Reinert said in a statement.
Local