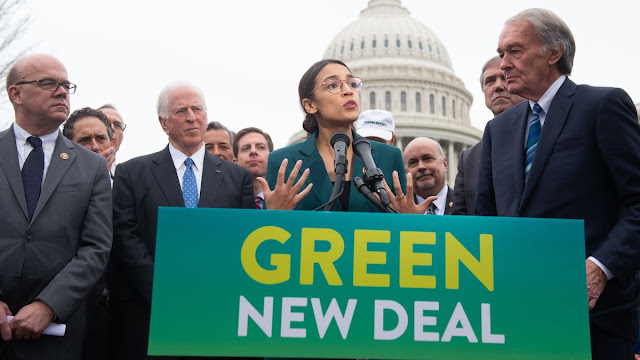 Senator Ed Markey and Representative Alexandria Ocasio-Cortez “formally” reintroduced the Green New Deal today. The first iteration of the plan, lest anyone forget, proposed the elimination of all fossil-fuel energy production; the end of all nuclear power; the phase-out of all “combustion-engine vehicles” — so trucks, airplanes, boats, and 99 percent of cars; the “retrofitting” of every home, factory, and apartment building in the country; the construction of “high speed rail at a scale where air travel stops becoming necessary;” the guarantee of a government a job; a “family-sustaining” wage with free college, state-provided “healthy food,” and “safe, affordable, adequate housing” for everyone; the banning of meat; and “economic security” for all who are “unable or unwilling” to work, among other socialist grab-bag items.
All in the next decade.
The plan was met with so much derision that Ocasio-Cortez claimed her office had accidentally released a working draft to the public – and most of the media went along with the charade. Of course, even if one concedes this fiction, it is worth noting that these are the kinds of insane policies being batted around by progressives.
When the second iteration was released — and embraced by every Democratic Party presidential candidate (including Joe Biden) — then-Senate Majority Leader Mitch McConnell put the Democrats’ resolution for a vote. Or, as the Associated Press framed it: “McConnell wields Green New Deal as bludgeon against Dems.” Here was a chance for Democrats to vote for nothing but affirmation of intent regarding their plan to save the world. Yet, Markey would not support his own resolution.
Now, we’re on the third iteration, which seems to be piecemeal  version of the old plan. What is the Green New Deal now? Everything, still. Infrastructure. Transit. Food. “The trampling of indigenous rights is a cause of climate change,” Ocasio-Cortez explained. “The trampling of racial justice is a cause of climate change.” The congresswoman says her plan will create “20 million union jobs in the United States of America.” You don’t want to be in a union? Too bad, I guess.
Americans use around 20 million barrels of petroleum every day. How many bazillions will the Green New Deal cost to replace that energy? We don’t know. But thanks to Politico, we do know that “Republicans pounced on the resolution’s reemergence.” (At this point, reporters who use the “pounce” formulation have to be doing it on purpose.) Progressives are merely “leaning into the framework to swiftly transition off fossil fuels” while the legislation has “become a prominent foil for conservatives.”
Well, yeah. The legislation to eliminate affordable fossil-fuel energy using authoritarian means has 103 House cosponsors. Foil away.
Opinion