Multiple Americans among those killed in Israeli stampede 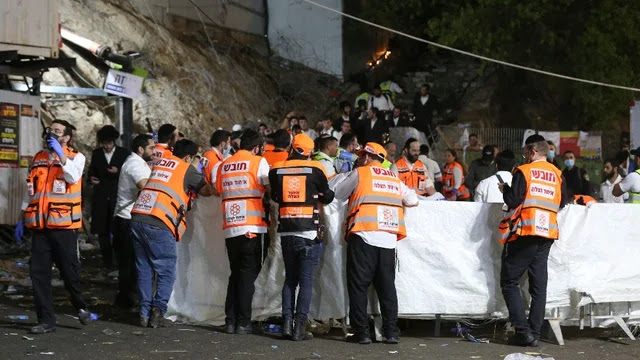 Multiple American citizens were among the at least 45 people killed in a stampede during a religious celebration in Israel, a State Department spokesperson confirmed.
The U.S. Embassy is working with local authorities to verify whether any additional citizens were affected and is providing consular support to affected U.S. citizens and their loved ones, the spokesperson said.
At least 45 people were crushed to death, including children, and an estimated 150 injured, amid a crush of thousands of people participating in a celebration marking the Jewish holiday of Lag B'Omer Thursday evening taking place near Mount Meron on the sea of Galilee.
"We offer our sincerest condolences to the families and loved ones of those injured and who perished in the tragedy at Mt. Meron during the Lag Ba’omer commemorations," the spokesperson said.
"Out of respect for the families at this difficult time, we have no further comment."
The tragedy has shocked Israel as one of the worst mass casualty events outside of armed conflict. President Biden called Israeli Prime Minister Benjamin Netanyahu on Friday and offered assistance in helping care for the wounded.
World