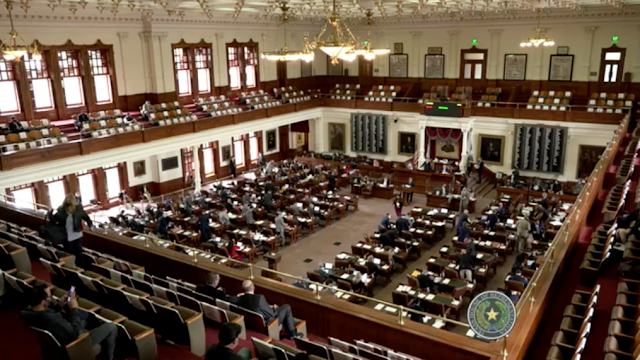 Going into budget day on the Texas House floor — often among the most jam-packed, hectic days of each biennial legislative session — the fight over Medicaid was fated to be the main event.
House Democrats foreshadowed the fight Thursday morning when Rep. Garnet Coleman (D-Houston) unveiled his strategy to push a handful of Medicaid-related budget amendments.
But on a budget day that has so far been dwarfed in length by those of the past, the main event that came in like a lion went out like a lamb.
Members of the House Democratic caucus stood around Coleman in support while he presented the amendment.
While not an explicit Medicaid expansion, the amendment would have directed the state to apply for a Section 1115 demonstration waiver — different from the similarly named waiver the Biden administration rescinded approval of last week — that would allow the state to design its own Medicaid-like strategy for covering uninsured individuals.
But in the end, only one Republican supported the motion and it failed by a vote of 68 to 80.
Eight of the nine Republican lawmakers who have signed on to Rep. Julie Johnson’s (D-Carrollton) House Bill (HB) 3871 that would explicitly expand Medicaid under Obamacare voted no on the amendment.
Rep. Lyle Larson (R-San Antonio) was the lone Republican “aye” vote.
Other than Larson, the vote fell down on party lines.
The Texas legislature has declined to expand the federal welfare program since the option was presented in the passage of Obamacare. The expansion would increase the qualifying threshold to those making 138 percent of the federal poverty level or less. Democrats say the move is necessary so that Texas’ uninsured residents can be covered.
About 15 percent of Texas’ 5.1 million uninsured population fall into the Medicaid coverage gap and almost as many already qualify for the program but have not enrolled.
Expansion would also increase the federal government’s share of state Medicaid expenses from 60 percent to 90 percent. House Democrats say expansion would bring $15 billion in more federal money to Texas.
But those opposed believe it to be a costly intrusion on state sovereignty where it needn’t be. Texas’ neighbor, Louisiana, found itself stuck with a cost two to three times the original projected amount due to higher than expected enrollment.
Despite all the build-up and even if Coleman’s amendment had passed, it likely would have been dead in the water in the Senate and it would’ve found no quarter on Governor Greg Abbott’s desk — who’s been adamantly against expansion during his tenure.
Johnson’s bill was referred to the House Human Services Committee in late March but has not been assigned a hearing.
And so, it is likely that come the 88th session in 2023, Democrats in Texas will be back to square one on Medicaid once again.
Texas