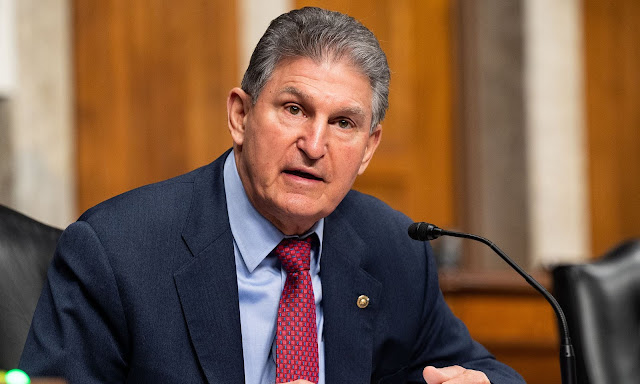 Centrist Sen. Joe Manchin (D-W.Va.), who has emerged as a powerbroker in the 50-50 Senate, said President Biden’s $2.25 trillion infrastructure proposal needs changes and that raising the corporate tax rate to 28 percent goes too far.
Manchin said Monday he would instead support raising the corporate tax rate to 25 percent, a level he identified last month as something he could back.
“As the bill exists today, it needs to be changed,” Manchin told Hoppy Kercheval, the host of West Virginia Metro News’s “Talkline” show.
"If I don't vote to get on it, it's not going anywhere," he added.
Manchin said other Senate Democrats are also concerned about Biden’s proposal to raise the corporate tax rate from 21 percent to 28 percent.
“It’s more than just me, Hoppy," Manchin added. "There’s six or seven other Democrats who feel very strongly about this. We have to be competitive, and we’re not going to throw caution to the wind.”
Manchin had previously signaled opposition to raising the corporate rate to 28 percent when he spoke to reporters before the Senate left town for the two-week Easter recess.
“There are other things we can change, too,” he said on March 24.
He said raising the corporate tax rate to 25 percent would raise about $400 billion over 10 years.
“I think we should be paying for anything that adds to the debt,” he said two weeks ago. “I think the corporate tax should have never gone below 25 percent.”
Manchin’s support is critical to Biden’s infrastructure plan because Senate Republican aides predict there won’t be a single GOP vote for the proposal in the upper chamber.
White House press secretary Jen Psaki said Monday the president is ready to negotiate with Manchin and other senators on how to pay for his ambitious infrastructure proposal.
“He knows some will come forward with different ways to pay for this package, and some may have views that it shouldn’t be paid for at all,” Psaki said, noting that Biden is aware of the different views within the Democratic caucus on how or whether to pay for the infrastructure plan.
“So we fully expect that from Sen. Manchin and other members, and we expect the question of how to pay for the package, if we should pay for the package, to be part of the discussion moving forward,” she added.
Asked specifically about Manchin’s proposal to raise the corporate rate to 25 percent instead of 28 percent, Psaki said: “We’re open to hearing ideas and proposals for members, and we encourage them to put them forward.”
Critics of raising the corporate tax rate say the costs will be passed on to consumers and workers as companies will look for ways to keep profits from sinking.
Matthew Dickerson, director of the Heritage Foundation’s Grover Hermann Center for the Federal Budget, said “going to a 28 percent rate when combined with state corporate tax rates puts us right back in the really dubious position of once again having the highest taxes on business in the entire” Organization for Economic Cooperation and Development.
“A review of the economic literature of who bears the brunt of corporate taxes shows the majority of that is born by labor,” he said.
National