Manchin: 'I'm not a roadblock' to Biden's agenda 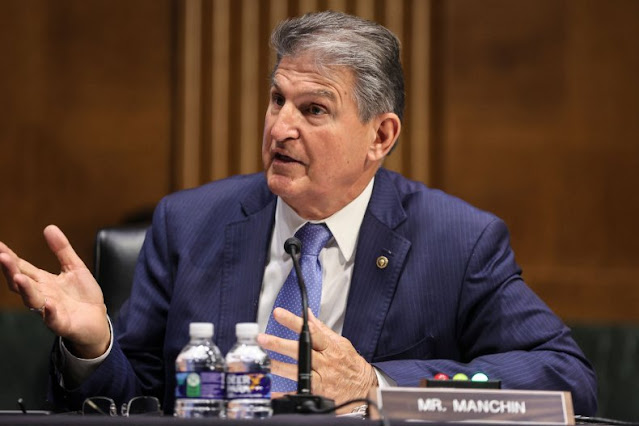 Democratic Sen. Joe Manchin (W.Va.) on Sunday shot down accusations that he is a “roadblock” in efforts to pass Democratic legislation, saying his opposition was part of “good government.”
On CNN’s “State of the Union,” host Dana Bash asked Manchin how he would respond to accusations from Democrats that he is a “roadblock,” noting that Democratic lawmakers feel they have a limited time to pass legislation important to their party before a risky midterm election that could take away their slim majorities in the House and Senate.
“I’m not a roadblock at all. The best politics is good government. I can't believe that people believe that if you just do it my way, that will give us the momentum to get through the next election,” Manchin said. “We won't give this system a chance to work. I'm not going to be part of blowing up this Senate of ours or basically this democracy of ours or the republic that we have.”
Bash also asked Manchin how he felt about the infrastructure plan by the GOP in response to Biden's proposal.
"That's a good start. It really is, and I'm glad they did it because it came out of the [Environment and Public Works Committee], which has [Sen. Tom Carper (D-Del.)] as chairman, and my colleague [Sen. Shelley Moore Capito (R-W.Va)] is basically the ranking member. They worked it together, so we know it has bipartisan support. We just have to look to see if we've gotten everything in there that we need."
Manchin last week floated the idea of breaking up President Biden's $2 trillion infrastructure plan, appearing to disagree with Biden's expanded definition of infrastructure.
"What we think the greatest need we have now that can be done in a bipartisan way is conventional infrastructure, whether it's the water, sewer, roads, bridges, internet — things that we know need to be repaired, be fixed," Manchin said.
Bash asked Manchin if he supported Biden's proposals that would expand resources for home care for the elderly and child care facilities, which many opponents have argued are not part of infrastructure.
Manchin said those items are "needed" but called for those issues to go through hearings and for professionals to be brought in to discuss them.
National