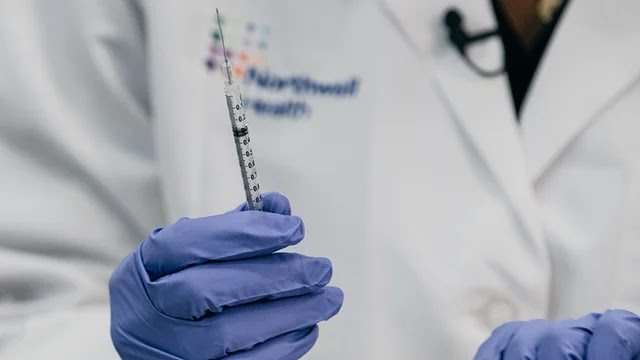 The Biden administration sees local doctors as key to the next phase of vaccine distribution, after many family physicians complained they've been left out despite being among the most trusted voices for vaccine-hesitant people.
Ada Stewart, president of the American Academy of Family Physicians, likened efforts to get local doctors more access to vaccines to a student with a raised hand who is saying, “Call on me. Call on me.”
“We are one of the most trusted folks when it comes to vaccines, and when we talk about vaccine hesitancy ... people want to go to that trusted resource, and usually that is their primary care physician,” she added.
The vaccination effort is now entering a more difficult phase, as the most eager have already been vaccinated, and the challenge is reaching people who are more hesitant. Polling shows getting the vaccine from someone’s personal doctor can help break through concerns about getting vaccinated.
But a survey this month from the Primary Care Collaborative found that just 38 percent of primary care doctors are currently administering the COVID-19 vaccine.
A Kaiser Family Foundation (KFF) poll in March found that 50 percent of people who want to “wait and see” before getting the vaccine said they would be more likely to get it if it was offered during a routine medical visit at a place they normally go for health care.
Among people open to getting vaccinated, 75 percent of adults said they would be very likely to get the shot if it were available at their own doctor’s office, according to a February poll from the KFF. That was the top response, compared with 61 percent for a local pharmacy and 44 percent for a mass vaccination site.
As the White House looks to get less eager people vaccinated, it says it will be stepping up efforts to get primary care doctors involved.
“We do strongly believe that primary care docs are going to have to play a significant role in the vaccination efforts,” Bechara Choucair, the White House vaccinations coordinator, told The Hill. “A lot of them are already playing a significant role, and we want to make sure that more and more of the primary care docs are playing a significant role in this vaccination effort, particularly as we come into this next phase of our vaccination plan.”
The Biden administration is providing lists of doctors able to provide the vaccine in underserved areas to states so that they can send doses there as well as working with states to sign up more doctor's offices and providing technical assistance.
“I can say that things are improving, but slowly,” Stewart said.
While the role of local doctors is now receiving increased attention, Farzad Mostashari, CEO of Aledade, a company that works with primary care doctors, said it was a “mistake” for states not to have included them from the beginning.
“For the most part, the states have continued to dribble it out to primary care,” he said, while relying on other places such as mass vaccination sites and hospitals.
“There’s really no reason why the community-based practices can’t and shouldn’t be involved,” said Shari Erickson, a vice president at the American College of Physicians, which represents many primary care doctors. She said the group has been advocating to the White House and encouraging its state chapters to contact their state governments.
“We're hopeful that others in the White House would begin to speak more about this and push some of the states to do more, to revise and update their distribution plans,” she added.
The federal government has provided vaccine doses to community health centers, which serve many underserved communities, but local doctors in other settings have had more difficulty.
One potential obstacle to getting more doctor's offices involved is the vaccine storage requirements. Once a vial is opened to administer one dose, the remaining doses will expire in a matter of hours. If a doctor's office is seeing only a small number of patients who need the vaccine each day, remaining doses could expire before they can be used.
“Part of the optimization of this vaccine rollout will involve having to get to smaller quantities so that primary care physician offices, nurse practitioner offices, clinics, can have the ability to go to the fridge and pull out a single dose of the vaccine,” Steven Stack, Kentucky’s public health commissioner, said on a call with reporters.
Moderna’s vaccine, for example, is increasing from 10 to 14 doses per vial, which Choucair acknowledged “could present some challenges.”
“We did hear from primary care docs that this might be too many doses for them to be able to administer, so we're working through this. I don't have any projections of what that might look like at this point, but we are aware of this issue,” he said.
The flip side of having a lower volume of people seeking the vaccine is that a doctor's office provides a more intimate venue for talking through concerns about the vaccine than a sports stadium or other mass vaccination site.
“If we want to address vaccine confidence issues, we really have to get it to the primary care physicians,” Erickson said.
Local