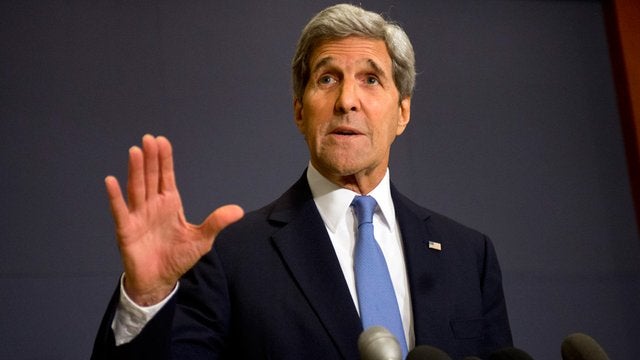 John Kerry, the U.S. special envoy for climate change, is denying allegations that he discussed Israeli military operations with Iran’s foreign minister when he served as Secretary of State under then-President Obama, calling the claims “unequivocally false.”
“This never happened - either when I was Secretary of State or since,” Kerry wrote on Twitter on Monday night.
The leaked audio in question was recorded last month. In it, Iranian Foreign Minister Mohammad Javad Zarif says that Kerry informed him that Israel attacked Iran’s interests in Syria at least 200 times.
Zarif made these comments during a conversation with economist Saeed Leylaz, according to The New York Times. The recording, however, was not meant to be published, which Zarif can be heard mentioning a number of times.
Zarif expressed astonishment at Kerry's alleged disclosure, though he did not reveal when Kerry made it.
Kerry served as Obama’s secretary of State from 2013 to 2017.
State Department spokesperson Ned Price would not comment on the contents of the audio but did seem to dismiss that Zarif’s astonishment was authentic.
“I would just make the broad point that if you go back and look at press reporting from the time, this certainly was not secret, and governments that were involved were speaking to this publicly, on the record,” Price said in response to a reporter's question at a briefing on Monday.
In 2018, an Israeli official confirmed that Israel executed more than 200 attacks against Iranian targets in Syria over the previous two years, Reuters reported at the time, which was the first public disclosure of a secret campaign that was suspected to have been carried out by Israel.
A number of Republicans are now calling for Kerry’s resignation from his current post in the Biden administration. In a floor speech on Monday, Sen. Dan Sullivan (R-Alaska) said Kerry “needs to go.”
World