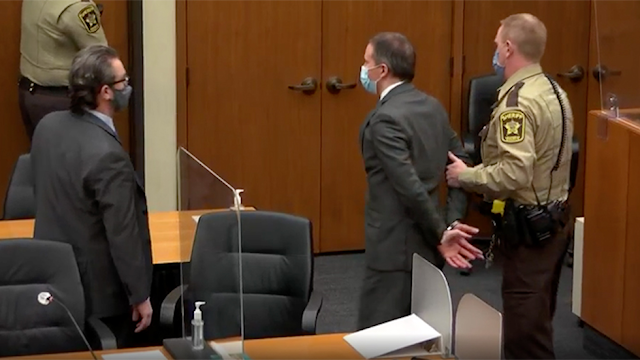 The judge who presided over Derek Chauvin’s murder trial ordered that the names of the jurors who handed down guilty verdicts against the former Minneapolis police officer remain secret until further notice.
In court documents made public on Friday, Hennepin County Judge Peter Cahill ordered that the jurors' identities be sealed for at least six months, citing concerns over possible unwanted publicity or harassment if their identities were made public.
The order will keep under wraps a list of the jury members who found Chauvin guilty of all three counts he faced, as well as their profiles and questionnaires, and the identities of alternate jurors.
The 12-member jury on Tuesday convicted Chauvin of second- and third-degree murder, as well as second-degree manslaughter in the death of George Floyd while in police custody. Chauvin is scheduled to be sentenced in June.
Cahill said the court and the lawyers involved in the trial have received unprecedented levels of emails and phone calls about the case, including some that were “incendiary, inflammatory, and [of a] threatening nature.”
“In light of all these considerations,” Cahill’s order reads, “the court finds that continuing restrictions on public disclosure of the jurors’ identities remain necessary to protect those jurors desiring to remain anonymous from unwanted publicity or harassment.”
The judge said the sworn jurors and alternate jurors were free to identify themselves publicly if they so chose.
One alternate juror, Lisa Christensen, granted an interview to NBC’s Minneapolis affiliate to discuss the case, saying she believed the trial proved Chauvin’s guilt beyond a reasonable doubt.
National