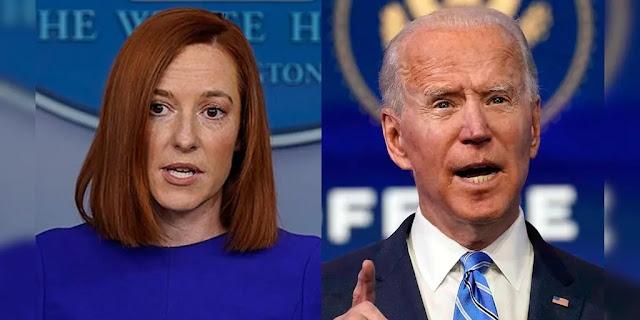 On Tuesday, as the jury deliberates in the Derek Chauvin trial, President Biden became the latest prominent Democrat to weigh in. He told reporters “I’m praying the verdict is the right verdict. The evidence is overwhelming in my view.”
Yet in a press briefing shortly thereafter, White House Press Secretary Jen Psaki said, “I don’t think he would see it as weighing in on the verdict.”
Huh? How is saying he is praying for “the right verdict” and offering that the “evidence is overwhelming” not an example of weighing in on the verdict?
This has become a regular feature of press briefings, in which Psaki has to constantly pretend that Biden didn’t say what we all clearly heard him say.
This happened just yesterday on immigration.
Over the weekend, Biden described the situation at the U.S.-Mexico border as a “crisis.”
He said regarding the plan for refugees, “We’re gonna increase the number. The problem was that the refugee part was working on the crisis that ended up on the border with young people and we couldn’t do two things at once. And now we’re going to increase the numbers.”
Yet on Monday, Psaki told reporters, “The president does not feel that children coming to our border seeking refuge from violence, economic hardships and other dire circumstances is a crisis.”
She claimed, “He does feel that the crisis in Central America, the dire circumstances that many are fleeing from – that that is a situation we need to spend our time on, our effort on.”
Yet Biden clearly referred to “the crisis that ended up on the border” — not the crisis in Central America.
This is a pathetic attempt to rewrite history in real time, with everything on tape.
Opinion