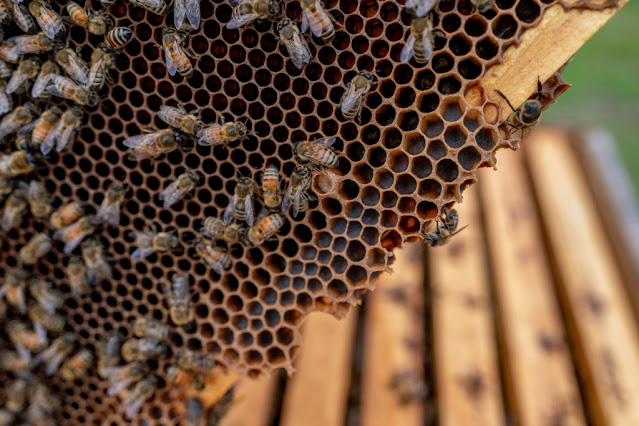 Most Texas beekeepers appear to have avoided extreme hive losses during Winter Storm Uri, but honeybees need extra care following the historic cold, according to a Texas A&M AgriLife Extension Service expert.
Molly Keck, AgriLife Extension entomologist, Bexar County, said the U.S. Department of Agriculture is surveying Texas beekeepers to determine the extent of bee and hive losses from the storm, but damage reports were limited.
Keck said bee die-offs occurred, but that total hive losses were relatively limited.
“At least throughout South-Central Texas, beehives were fine,” she said. “People knew the storm was coming and covered them with blankets to help insulate them. I think hives did fairly well if they were generally healthy going into the storm.”
Keck said losses were mostly limited to worker bees that balled up on the outer edges to insulate the hive from the cold. Smaller and stressed hives were likely more susceptible because they did not have the numbers to generate enough warmth to survive.
Reduce stress with food and monitoring
Hives should recover if the queen and enough worker bees survived, but Keck said it is a critical time for them because wildflower blooms are behind schedule. Beehives that survived will need help to thrive.
“Nothing is flowering right now, so beehives need supplemental food,” she said. “Stressed hives may not make it to bloom because flowering is behind schedule, so we need to feed them like crazy even beyond when wildflowers bloom.”
Keck recommends a 1-1 mixture of water and sugar – 8 pounds of sugar to 1 gallon of hot water that is stirred into a syrup without bringing the mixture to a boil. The syrup should then be placed in the hives.
Beekeepers should also be watchful regarding mite infestations, Keck said.
“Two things stress beehives coming out of winter – lack of food and mite infestations,” she said. “So, beekeepers need to keep a watchful eye out for mites and treat for them before they become a problem.”
Replenish beehive populations
Along with heavy supplemental feeding and protection from pests, Keck said beekeepers should consider triggering queen bees to lay eggs earlier than typical for hives that suffered significant losses or that are small and stressed. Providing supplemental pollen, either synthetic or natural, will tell the queen it is time to start laying eggs.
Supplemental pollen can be located at most beekeeping supply stores, Keck said.
“The protein from the pollen triggers the queen,” she said. “Spring is the time to build up populations, so we have to do it artificially if they want to split their hives or produce honey."
Wildflowers, native bees and other pollinators
Keck said honeybees and native bees’ favorite food are big fields of a single wildflower.
“They like a lot of the same food, big blankets of wildflowers over flower beds that we plant for pollinators,” she said. “You will see honeybees in the garden, but they get most of their food from monoculture – lots of the same flowers and plants in one spot.”
Keck said native bees have yet to emerge en masse for spring. Native bees and other pollinators other than tropical species likely fared better than honeybees because they are adapted for extreme weather changes.
“We don’t think the winter storm affected insects, including pollinators, because of their adaption to hunker down and go through diapause, or a hibernation-like state,” she said. “They may run into issues like a lack of a food source from plants that might be behind schedule when they emerge to feed and mate. But native bees won’t start coming out until it becomes consistently warm, and wildflowers should be out by then.”
Keck said she does not recommend homeowners put out sugar mixtures for native bee populations unless it is a consistent, year-round practice. The syrup can give bees a false sense of food availability that can leave them vulnerable if/when the source stops.
Local