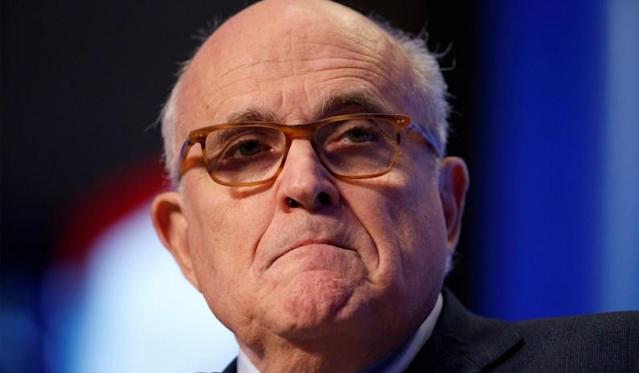 Federal prosecutors executed a search warrant Wednesday at the apartment of Rudy Giuliani, advancing an investigation into former President Trump’s personal lawyer and his dealings with Ukraine.
Authorities seized Giuliani’s electronic devices during early morning searches at both his home and law office, a significant development in the long-running investigation into whether the former New York mayor illegally lobbied the Trump administration on behalf of Ukrainian oligarchs.
Those same officials were aiding Giuliani in his search for dirt on Trump’s political rivals, including then-Democratic presidential candidate Joe Biden.
Authorities also executed a warrant to obtain the phone of Giuliani associate Victoria Toensing, a lawyer and Republican operative.
The U.S. attorney's office in Manhattan and the FBI declined to comment on the matter.
“The search warrants involve only one indication of an alleged incident of failure to register as a foreign agent,” Giuliani's attorney, Robert J. Costello, said in a statement, adding that the materials seized are “replete with material covered by the attorney client privilege.”
“Twice, Mr. Giuliani’s counsel offered to sit with [federal attorneys for the Southern District of New York] and demonstrate that Mr. Giuliani’s conduct was lawful. It is outrageous that the Trump Derangement Syndrome has gone so far that hatred has driven this unjustified and unethical attack on the United States Attorney and Mayor who did more to reduce crime than virtually any other in American history."
The Wall Street Journal reported that federal authorities entered Giuliani's apartment at 6 a.m. seeking communications between the former New York City mayor and a number of people, including John Solomon, a former opinion columnist for The Hill.
Solomon wrote several columns regarding Ukraine that became a subject of the 2019 House Intelligence Committee impeachment inquiry against Trump. The Hill published a review of Solomon’s columns the following year and determined they lacked context and key disclosures.
Solomon has been represented by Toensing and her husband, attorney and political commentator Joseph diGenova. Toensing also represented Ukrainian oligarch Dmitry Firtash, who has been indicted on bribery, racketeering and campaign finance charges and was sought out by Giuliani as he looked for dirt on Biden.
When reached for comment, a spokesperson for diGenova and Toensing said: “Ms. Toensing is a former federal prosecutor, and senior Justice Department official. She has always conducted herself and her law practice according to legal and ethical standards. She would have been happy to turn over any relevant documents. All they had to do was ask. Ms. Toensing was informed that she is not a target of the investigation."
Daniel Goldman, the former lead counsel for the 2019 House impeachment inquiry, said the warrant served on Toensing “makes sense.”
“This makes sense because, during the Ukraine impeachment investigation, we obtained draft retainer agreements between a Ukrainian official and Toensing and diGenova that Giuliani brokered,” Goldman tweeted.
During the Trump administration, Justice Department officials repeatedly sought to block the U.S. attorney's office in Manhattan from seeking a warrant for Giuliani’s phones.
“What is disturbing to me is that, if there was probable cause to believe that there was evidence of a crime at Giuliani’s business or home last year, and Bill Barr’s Justice Department wouldn’t do anything about it — it’s another indication of politicization at the very top of the Justice Department,” House Intelligence Committee Chair Adam Schiff (D-Calif.), who helped lead the impeachment inquiry, said on MSNBC.
The new warrant suggests federal prosecutors believe they have a compelling case. Prosecutors are only able to secure a warrant if they can convince a judge that a search is likely to produce evidence of a crime.
Giuliani never registered as a foreign agent for his work and has denied any wrongdoing.
“I do not lobby, I do not do foreign representation,” he told Roll Call in 2019.
However, those close to Giuliani have been arrested in connection with their work.
Giuliani associates Lev Parnas and Igor Fruman were both arrested and charged with campaign finance crimes for allegedly seeking to funnel money to U.S. politicians to influence U.S.-Ukraine relations. They have pleaded not guilty.
Giuliani took a trip to Ukraine in 2019 as part of an effort to make a documentary TV series pushing for an investigation into Joe Biden and his son Hunter Biden, who previously sat on the board of Ukrainian energy company Burisma. He argued the series would show Kyiv's role and potential interference in the 2016 general election.
U.S. intelligence agencies have concluded that Russia sought to undermine the 2016 U.S. election. Hunter Biden is facing a federal probe into his taxes.
Giuliani also came under scrutiny for his role in ousting Marie Yovanovitch, the former U.S. ambassador to Ukraine, from her post.
He is now being sued by Dominion Voting Systems, which launched a $1.3 million defamation suit against him over his attacks on the company as part of an effort to undermine the credibility of the 2020 election.
House Homeland Security Committee Chairman Bennie Thompson (D-Miss.) and the NAACP are also accusing Giuliani and Trump in a federal lawsuit of conspiring with extremist groups to storm the Capitol on Jan. 6.
National