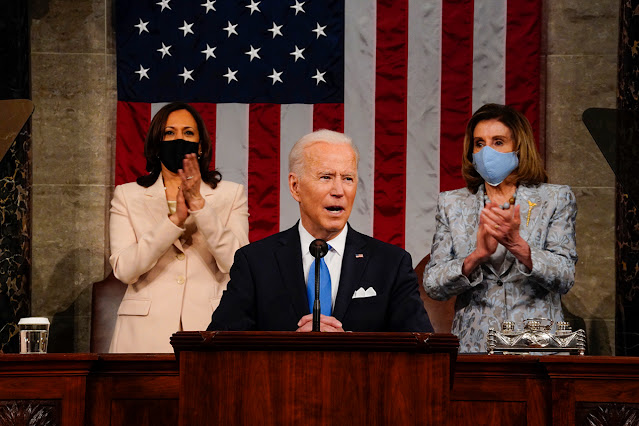 Democrats are scrambling to figure out how they can get President Biden’s $4 trillion spending plan through Congress.
Biden unveiled a $2.3 trillion infrastructure package late last month and a $1.8 trillion families package Wednesday night during his first address to Congress — presenting congressional Democrats with the herculean task of unifying their razor-thin majorities behind historically eye-popping figures.
The two proposals are supposed to be Biden’s next big legislative achievement, but there are deep divisions among Senate Democrats about the scope and strategy: Centrists want at least part of the proposals to be bipartisan, while progressives want Biden to go even bigger.
“We’re probably going to have some work to do in our own caucus,” said Sen. Bob Casey (D-Pa.). “I think we’re still a ways away from that. I don’t think there's a 50-vote consensus yet.”
Sen. Dick Durbin (D-Ill.), asked about how to move the two packages, said it's “predicated on my whip,” referencing how senators count the votes for a bill.
“Whatever helps us get important things done,” the Senate majority whip added.
Democrats acknowledge there are internal challenges going forward. And while Senate Majority Leader Charles Schumer (D-N.Y.) has warned that Democrats are willing to go it alone — telling reporters this week that “of course” that was an option — he’s also been careful not to commit to one path as congressional Democrats and the White House continue to weigh the possibility of picking up some GOP support.
“I think there’s a case to be made to do it both ways,” said Sen. Chris Murphy (D-Conn.), asked about one big package or trying to split off what can get Republican votes.
But a growing number of Democrats are skeptical of GOP outreach efforts, predicting that Republicans will never get on board in a meaningful way. A group of 10 Republicans recently proposed their own infrastructure package, at $568 billion, similar to coronavirus talks earlier this year when GOP senators pitched a relief bill at a fraction of Biden’s $1.9 trillion plan. Democrats ultimately passed COVID-19 legislation without any GOP votes.
Senate Budget Committee Chairman Bernie Sanders (I-Vt.) said he will mark up a budget resolution unlocking the next reconciliation package in May, though Schumer will be the one to decide when it comes to the floor for a vote.
Casey said he thought passing both Biden’s jobs plan and the family plan as one package with only Democratic votes is “probably the most likely” outcome, and that he didn’t think it was a good idea to break up the proposal like moderate-minded senators have suggested.
“In some ways we’re negotiating against ourselves. I don’t think it’s our job just so we can say, ‘Well, that piece over there was bipartisan,’ and wait for the pat on the back,” Casey added about peeling off “core” infrastructure so that it is a separate bill in hopes of garnering GOP support.
Senate Banking Committee Chairman Sherrod Brown (D-Ohio) said while Democrats should keep striving for bipartisanship, they should also move forward on a reconciliation track and prep pieces of the bill.
“What they want to do on infrastructure and families is just short of pathetic,” Brown said, referring to Republicans.
But to go it alone, Democrats would need total unity from the 50-member Democratic caucus, something they don’t yet have.
A group of centrist senators has floated peeling off components that they think can get the backing of at least 10 Republicans, allowing that portion to pass as a stand-alone bipartisan bill. The rest, they argue, could go through reconciliation, which lets Democrats avoid the 60-vote filibuster and pass legislation without Republicans.
“We have to go through the process … Let the committees work them,” said Sen. Joe Manchin (D-W.Va.), asked about wrapping up one massive reconciliation bill. “Put them on the floor individually and see where they go there.”
Manchin was quick to reject concerns from his Democratic colleagues that holding out GOP support would waste too much time.
“I’ve been here for 10 years. I could say that about 10 years, OK? Tell them that,” he said.
Manchin is part of a group of senators trying to see if they can craft a bipartisan bill, though the lawmakers involved stressed that it was too early to say whether they’ll be able to break the gridlock. Sen. Jon Tester (D-Mont.) and Manchin have both raised concerns about the massive amounts of spending being greenlit under Biden’s two plans.
Manchin told reporters he was “very uncomfortable” with the spending levels. Combined with the recent $1.9 trillion coronavirus package, passage of the two infrastructure plans would bring spending to roughly $6 trillion since Biden took office.
“You’re going to find how you’re going to pay for it, you know?” he said.
Tester added that lawmakers should look at both the jobs plan and the families plan and see if there is overlap that could eliminate some of the spending.
“I think we’ve got to look and see how these interfaces with the previous packages,” Tester said.
But even as there’s talk of potentially going smaller, or breaking up Biden’s proposals, senators are also piling on with things they want to add into what’s likely to be one of the few must-pass bills that gets through Congress this year.
Sanders noted that when he marks up the next budget resolution it would include Biden’s programs “and other initiatives.” Vice President Harris, according to Durbin, is also asking members for ideas about what additional measures could be considered as part of the package as it moves through the Senate.
“I think the important thing to remember here is that the legislature writes the law,” said Sen. Brian Schatz (D-Hawaii). “So what the executive branch is doing is offering a framework and then we’re going to do our job.”
National