Cornyn: Is Biden 'really in charge'? 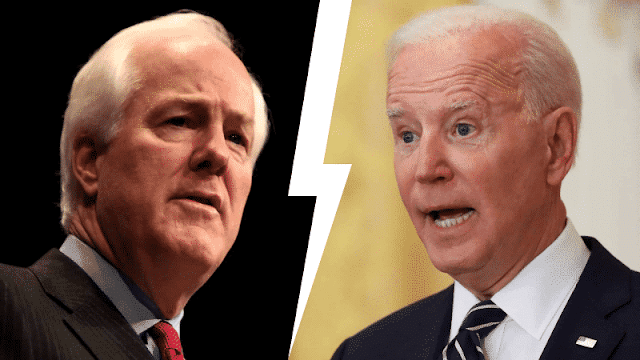 The White House on Monday brushed off a tweet from Sen. John Cornyn (R-Texas) that suggested President Biden may just be a figurehead because of his carefully calibrated media presence.
Cornyn earlier in the day shared a Politico story titled "The Biden White House media doctrine: Less can be more" and quoted a passage that notes Biden has done few cable news interviews, does not tweet frequently or with off-the-cuff commentary and mostly delivers scripted public comments.
"Invites the question: is he really in charge?" Cornyn tweeted.
"I can confirm that the president of the United States does not spend his time tweeting conspiracy theories, he spends his time working on behalf of the American people," White House press secretary Jen Psaki responded when asked about Cornyn's commentary at a briefing.
Psaki's remarks appeared to be a shot at former President Trump, who was kicked off Twitter in January but spent his final months on the platform spreading misleading or false information about the 2020 election and at times shared material connected to the QAnon conspiracy theory.
Cornyn's tweet prompted broader blowback from Democrats and political commentators who hit Cornyn for promoting conspiracy theories about whether Biden is in charge and for suggesting the current president's lack of constant media presence is problematic given Republican senators spent four years dodging questions about Trump's Twitter feed.
"Can the President govern without sending crazy tweets in the middle of the night, one of the highest ranking Republicans in the Senate asks? Yes, it turns out he can," Rep. Don Beyer (D-Va.) tweeted.
"Lord have mercy. You would think you would lauding Biden for this. So you are criticizing him for actually spending time on his actual job? Maybe you could consider doing that," tweeted Matthew Dowd, a former aide to George W. Bush.
Cornyn followed up his original tweets by noting he "posted the whole [Politico] story so people can read it for themselves, and highlighted a couple of excerpts."
Texas