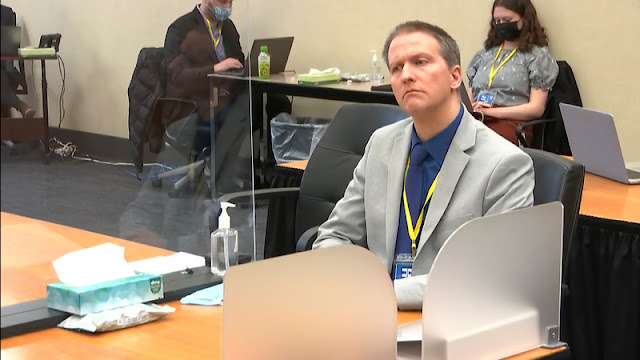 The city of Minneapolis and the nation at large began a tense waiting game Monday after closing arguments were heard in the trial of former police officer Derek Chauvin, who’s charged with the murder of George Floyd.
Prosecutor Steve Schleicher told the jury that Chauvin kneeling on Floyd’s neck for over nine minutes was murder, not policing.
“George Floyd was not a threat to anyone. He wasn't trying to hurt anyone. He wasn't trying to do anything to anyone,” Schleicher said.
Chauvin defense attorney Eric Nelson pushed back in his closing remarks, arguing that Floyd died from the drugs in his system and underlying heart disease.
“There is absolutely no evidence,” Nelson argued, that Chauvin purposely used unlawful force on Floyd.
He concluded that the jury must acquit Chauvin as the prosecution failed to prove the charges presented beyond a reasonable doubt.
Chauvin faces three criminal counts — second degree murder, third degree murder and second degree manslaughter.
The jury will be sequestered while it works to come to a verdict, a process that could take days. Chauvin could be found guilty of all three charges, as prosecutors urge, or one or two of the charges. He could also be found not guilty on all charges, a more than common outcome in police misconduct cases but one that in this case would almost certainly lead to unrest across the country.
“The defendant is guilty of second degree murder, he's guilty of third degree murder, he's guilty of second degree manslaughter, all of them, because this was not a justified use of force, you cannot justify this use of force, it's impossible,” Schleicher told the jury on Monday.
Before arguments were given, Hennepin County District Judge Peter Cahill read to the jury an explanation of Chauvin's charges.
For the second-degree murder charge to stick, the jury must find that Chauvin killed Floyd by kneeling on his neck. The prosecution doesn’t need to prove that Chauvin had intent to kill Floyd but that he committed felony assault — defined as the intentional use of unlawful force that results in bodily harm.
With the lesser murder charge, the jury would need to conclude that Chauvin acted without the intent to kill Floyd, but acted in a “eminently dangerous,” way “evincing a depraved mind, without regard for human life.”
The manslaughter charge only requires the prosecution to prove that Chauvin “consciously” acted in a manner that had the chance of causing “death or great bodily harm” to Floyd.
The final day of arguments again featured video from Floyd’s killing on May 25, 2020, that led to nationwide protests against police misconduct and for racial justice last summer.
In the video, Floyd can be heard pleading with Chauvin that he couldn’t breathe as the former police officer knelt on Floyd’s neck for over nine minutes in graphic bystander footage. Chauvin remained on Floyd even after he became unresponsive, relenting only after paramedics arrived on the scene. Floyd, 46, was pronounced dead shortly after at Hennepin County Medical Center.
“This case is exactly what you thought when you saw it first, when you saw that video it is exactly that, you can believe your eyes,” Schleicher said on Monday.
The two sides in their closing arguments again focused on the cause of Floyd’s death, with prosecutors saying it was Chauvin’s knee that killed him and the defense arguing that other factors were in play.
Schleicher noted the testimony from Hennepin County Medical Examiner Andrew Baker, who stated on his autopsy report that Floyd died of “cardiopulmonary arrest [the stopping of both the heart and lungs] complicating law enforcement subdual, restraint, and neck compression.”
Baker “ruled the death a homicide, death at the hands of another,” Schleicher said. “What the defendant did to George Floyd killed him.”
Chauvin’s defense has argued that trace amounts of fentanyl and methamphetamine found in Floyd’s system contributed to his death, and that the circumstances of an arrest in which a crowd had gathered and was angry with how Floyd was being treated had also to be considered.
“In this case the totality of the circumstances that were known to a reasonable police officer in the precise moment the force was used, demonstrates that this was an authorized use of force, as unattractive as it may be,” Nelson told the jury.
The prosecution noted that while Baker described the traces of the two drugs as contributing factors in Floyd’s death, he said that neither were direct causes of Floyd’s death.
Multiple medical professionals called by the prosecution said that Chauvin died from low levels of oxygen, or asphyxia.
Numerous Minneapolis police officers also testified for the prosecution saying that Chauvin’s use of force was not consistent with department training. This included police chief Medaria Arradondo, who vehemently condemned Chauvin’s conduct.
Chauvin and the three other officers who were on the scene were fired from the force the day after Floyd’s death.
Minneapolis has been bracing for the verdict in the high-profile case for weeks. The metropolitan area was inflamed further last weekend when Daunte Wright, a 20-year-old Black man, was shot and killed by a white police officer during a traffic stop in the suburb of Brooklyn Center, Minn., roughly 10 miles from where Chauvin is standing trial.
The officer in question, Kim Potter, has since resigned and been charged with second-degree manslaughter. The suburb’s police department has said that the fatal shooting was accidental, that Potter meant to discharge her taser instead of her firearm.
National