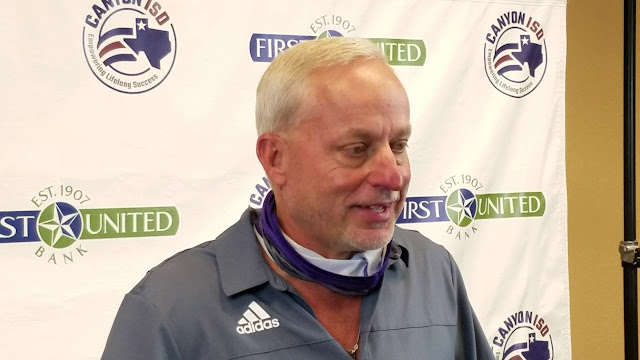 After 21 seasons leading the Canyon Eagles football program, head coach Blake Bryant called it a career Wednesday morning as he met with his football team one last time to deliver the news of his retirement.
Bryant took over at Canyon High in 2000 and is the son of Bill Bryant, a THSCA Hall of Honor member and a graduate of Dublin High School.
Coach Bryant began his coaching journey at Pasadena Rayburn where he spent one season before going to Odessa High to be the offensive coordinator forthree seasons. Bryant then went to his father’s hometown of Temple where he spent six seasons as the offensive coordinator for the Wildcats before heading to the Texas panhandle in 2000.
“To be at one school for as long as I have I’ve been really lucky, it’s not the norm in this profession,” Bryant said. “After each season my wife and I talk and we discuss our goals and dreams and what we want to do. This year, for the first time my wife said she was tired of sharing me. She’s been unbelievable supporting me and the kids and been to every game and all that stuff that coaches wives do.
"I thought about it and decided it was time for me to spend more time with her and the family. I feel we’ve left the program in great shape and I think it’s a great time to step aside and let someone else steer the ship, we’ve got a great staff in place and my hope is someone on staff will get a chance to take this thing over and do even better than I did."
Canyon, which advanced to the state semifinals twice (2006 and 2020) under Coach Bryant, also made the third round of the playoffs three times in 2013, 2015 and 2018. The Eagles finished 12-2 in 2020 and made the 4A-Division semifinals falling to eventual state champion Argyle.
Local