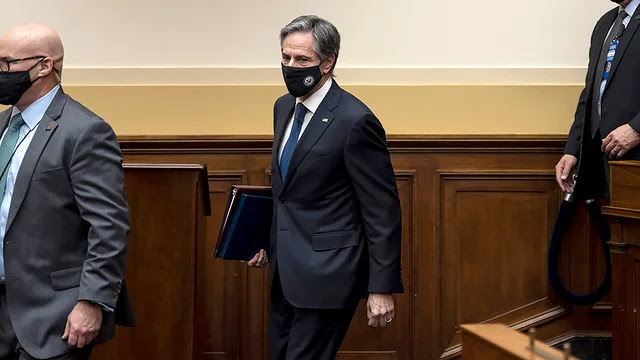 Secretary of State Antony Blinken spoke on the phone with NATO Secretary General Jens Stoltenberg, the State Department announced Monday, with the two discussing multiple topics including increased Russian aggression.
Blinken, who is traveling to NATO headquarters this week, and Stoltenberg talked about the need for a deescalation of tensions along the Russia-Ukraine border, where thousands of Russian troops have gathered amid unrest in the Ukrainian-controlled Donbass province.
"Secretary Blinken and Secretary General Stoltenberg discussed a range of issues, including the immediate need for Russia to cease its aggressive military buildup along Ukraine’s borders and in occupied Crimea. They also discussed the prospects for advancing peace in Afghanistan as well as plans for the upcoming NATO Summit," read a readout from the State Department.
The call came the same day as the State Department announced Blinken's plans to meet with NATO officials in Brussels from Tuesday through Thursday, a trip that was first reported Sunday by Reuters.
"The Secretary will take this opportunity to reaffirm the U.S. commitment to the Transatlantic alliance as a critical partnership for achieving our mutual goals. Separately, Secretary Blinken will hold bilateral and multilateral meetings with European counterparts to discuss key priorities and shared challenges," read a State Department statement of Blinken's plans for discussions at NATO headquarters.
His arrival this week also comes as the Biden administration has yet to announce whether the U.S. will honor a May 1 deadline for the withdrawal of combat troops from Afghanistan.
World