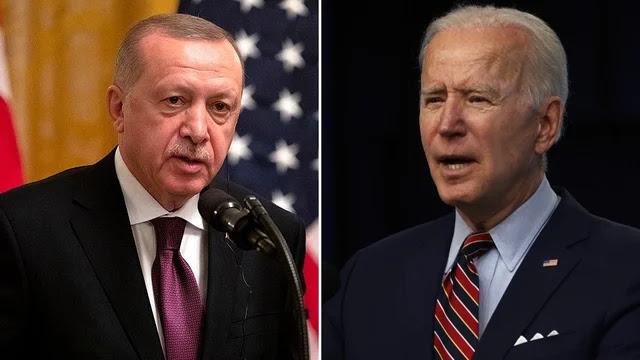 President Biden spoke with Turkish President Recep Tayyip Erdoğan for the first time as commander in chief on Friday amid reports that the White House is expected to formally declare that the massacre of roughly a million Armenians by the Ottoman Empire more than a century ago was “genocide.”
The White House readout of the call noted the two men would meet this summer but made no mention of discussion about the potential genocide declaration, which Turkey has long lobbied against strenuously.
But Biden did convey “his interest in a constructive bilateral relationship with expanded areas of cooperation and effective management of disagreements,” according to the White House readout. The effective management of disagreements could certainly cover the Armenian genocide issue.
The New York Times and other outlets reported earlier this week that Biden is expected to issue a formal declaration stating that the killings of Armenians during World War I was a genocide, a move that is likely to exacerbate tensions with Turkey, a NATO ally.
White House press secretary Jen Psaki has repeatedly declined to confirm the reports, saying that Biden would have more to say on the topic this weekend. Armenian Genocide Remembrance Day is Saturday, and a formal declaration is likely to be issued on that day if Biden follows through with the plans.
Biden pledged on the campaign trail to back a resolution recognizing Armenian genocide, but it’s possible that diplomatic considerations could cause him to reconsider that promise. Former President Obama made a similar pledge but did not follow through with it in office.
No president since Ronald Reagan has described the massacre as genocide over concerns of angering Ankara.
Biden has endured pressure from lawmakers to recognize Armenian genocide. Rep. Adam Schiff (D-Calif.) led a letter to Biden this past week calling on him to follow through on the promise “to recognize the genocide and your decades of leadership on this issue.”
Biden and Erdoğan agreed to hold a bilateral meeting on the sidelines of a NATO summit in June, according to the White House readout of the call.
The meeting between Biden and Erdoğan in June would come on the sidelines of the NATO summit in Brussels, which the White House announced Friday Biden plans to attend in person. Biden will travel first to the United Kingdom for a Group of Seven summit there before making a stop in Belgium for the NATO summit and meetings with European Union leaders.
World