Biden emphasizes 'unwavering commitment' to Ukraine during call with Putin 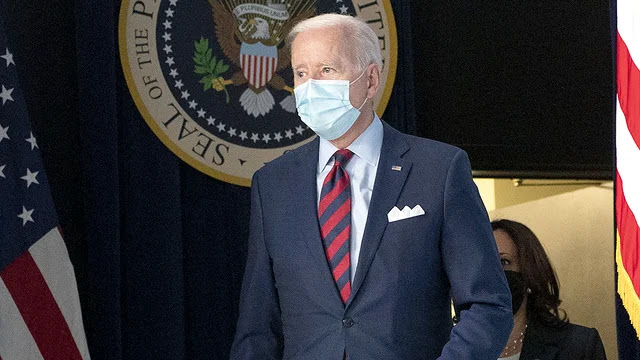 President Biden on Tuesday raised concerns with Russian President Vladimir Putin about escalating tensions in Ukraine, where Moscow has taken an aggressive posture.
Biden spoke to Putin over the phone for the second time since taking office and "emphasized the United States’ unwavering commitment to Ukraine’s sovereignty and territorial integrity," according to a White House readout of the call.
"The President voiced our concerns over the sudden Russian military build-up in occupied Crimea and on Ukraine’s borders, and called on Russia to de-escalate tensions," the White House said in a statement. "President Biden reaffirmed his goal of building a stable and predictable relationship with Russia consistent with U.S. interests, and proposed a summit meeting in a third country in the coming months to discuss the full range of issues facing the United States and Russia."
Biden and Putin also discussed the extension of the New START nuclear arms treaty, and the president warned his Russian counterpart against cyber intrusions and election interference in the wake of the SolarWinds hack, according to the White House.
But Russia's increasingly aggressive posture toward Ukraine has alarmed global watchdogs and caught the eye of the Biden administration.
"The United States is increasingly concerned by recent escalating Russian aggressions in eastern Ukraine, including Russian troop movements on Ukraine's border," White House press secretary Jen Psaki told reporters last week. "Russia now has more troops on the border with Ukraine than at any time since 2014. Five Ukrainian soldiers have been killed this week alone. These are all deeply concerning signs."
Russia annexed the Crimean Peninsula in 2014, which triggered international sanctions and prompted Russia's expulsion from the then-Group of Eight.
Biden spoke earlier this month with Ukrainian President Volodymyr Zelensky and affirmed U.S. support for Ukraine in the face of Russian aggression.
World