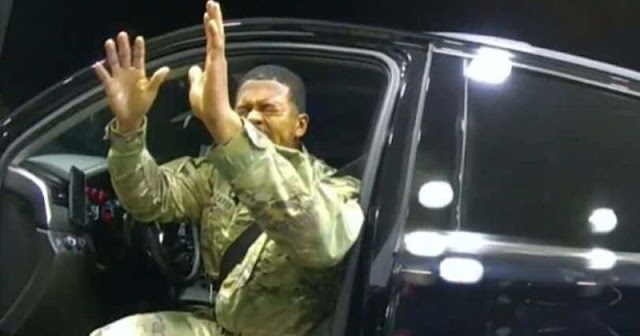 The Army’s top enlisted leader on Monday voiced his support for the Army officer involved in an incident caught on camera in which two Virginia police officers drew their guns and pepper-sprayed him during a traffic stop.
Sgt. Maj. of the Army Michael Grinston tweeted he “was concerned by the video” of Caron Nazario, a second lieutenant, who sued the police officers involved in the December incident at a gas station in the southeastern town of Windsor.
“He represented himself and our Army well through his calm, professional response to the situation – I’m very proud of him,” Grinston wrote.
Nazario filed a lawsuit earlier this month asserting that the officers violated his constitutional rights during the traffic stop and citing the “disgusting nationwide trend of law enforcement officers, who ... engage in unprofessional, discourteous, racially biased, dangerous, and sometimes deadly abuses of authority.”
In the footage, Nazario, who is Black and Latino, can be seen dressed in his uniform and holding his hands up and out of the window of his parked car at a gas station as the officers point their guns at him.
The officers order Nazario at gunpoint to get out of his vehicle, to which he responds, “I’m honestly afraid to get out.”
“Yeah, you should be!” one of the cops can be heard saying.
An officer then pepper-sprays Nazario multiple times after another attempts to open his car door.
One of the police officers has since been fired. Virginia Gov. Ralph Northam (D) announced on Sunday that he is directing the Virginia State Police to conduct an independent investigation into the traffic stop.
Grinston said he cannot comment on ongoing litigation, but that Nazario “is receiving the support from his leadership he needs during this time.”
“Situations like this are what I want Soldiers to discuss. This is the reality that some of our Soldiers still face. As a Leader, you should know that and be willing to have conversations about how events like this impact your teams,” Grinston wrote.
National