Analysis: Texas lawmakers are working on an incomplete budget 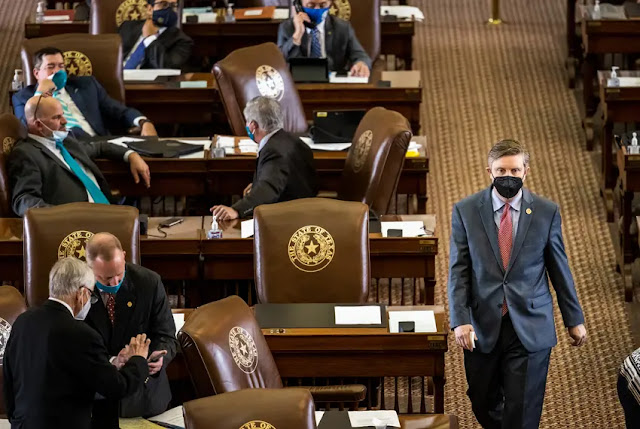 By Ross Ramsey
A lot of the money available to the Texas Legislature for programs and services isn’t part of the state budget yet. It’s not even part of the debate.
As the Texas House begins debate on its version of the quarter-trillion-dollar spending blueprint for the next two years, billions of dollars of federal Medicaid money are in limbo, and Washington D.C., is waiting to see what Austin plans to do with programs that are jointly financed by the state and the feds.
At the same time, the state government hasn’t decided how to use the $38.6 billion in federal COVID-19 relief money sent our way by the Trump and Biden administrations.
The budgets under consideration by the Legislature are in the $250 billion range — about as high as they’ve ever been. But they don’t include billions that are likely to be spent here, one way or another, over the next two years.
Texas is one of a dozen states that has not expanded its Medicaid program since the passage of the Affordable Care Act, back when Rick Perry was governor and Barack Obama was president. The federal incentives have been sweetened on a program that already offered about $9 in federal money for every $1 spent by the state. One big current incentive would give Texas a more generous federal match on its current Medicaid spending if the state opts for Medicaid expansion.
Texas conservatives have held their ground, resisting an expansion they say would eventually raise taxes, create new entitlements and comes with federal requirements they can’t abide. Bills have been filed every session, including some by Republicans, without any change. There’s a new effort bubbling in the House this session. Expansion supporters say their legislation, still awaiting a committee hearing, has the support of more than half of the 150 members of the House — most of the Democrats and enough of the Republicans to have a majority. Expect that stalled legislation to appear in the form of an amendment to the state budget when it comes up.
If it passes, it could add more than $5 billion to state health care programs and services every year.
Another Medicaid program is in doubt. Last week, the Biden administration rescinded changes to the state’s “1115 waiver” — a federal funding agreement that would have extended the safety net for some of the state’s uninsured residents. That program covers uncompensated care in hospitals in Texas.
That funding won’t stop until the end of September 2022, so there’s time for the state to negotiate. But the administration’s move raised the stakes in a running back-and-forth between the state, which has pushed for compensation for hospitals while resisting Medicaid expansion, and a federal government that is trying to get Texas and other holdouts to cover more of their uninsured residents with expansion.
One way to analyze it: The Trump administration granted a 10-year 1115 waiver at the end of Donald Trump’s term; the Biden administration included those “sweeteners” in their COVID-19 relief bills that would improve the federal match in existing Medicaid plans. And when that didn’t work, they rescinded the waiver.
The 1115 waiver extension gave the state some room to work, removing pressure to expand Medicaid. Without that, talk of expansion has increased. It started coming from some new voices, too: A huge chunk of the Medicaid money coming into Texas — money in that 1115 waiver — comes in as supplemental payments to compensate hospitals around Texas without first making a stop in Austin. It’s not on the state’s books, but it’s critical to the state’s health care economy.
Now it’s time for the state to finish up work on the two-year budget that runs through August 2023, and Medicaid funding is up in the air.
But that’s not the only thing fluttering around. The federal aid coming out of various pandemic relief bills includes $16.7 billion for the state, $11 billion for local city and county governments, and $17.9 billion for public and higher education, according to the state comptroller. Most of that, and other money in the relief bills, would flow through the state government — a total of $38.6 billion.
Like the Medicaid money, that’s not folded into the state budget yet, either. That’s especially true of that $16.7 billion intended for state use. If it’s not in the budget, the Legislature might be leaving it for the governor to spend, without their advice and consent.
This article originally appeared at the Texas Tribune.
Opinion