Analysis: 2022 candidates are popping up faster than bluebonnets in Texas 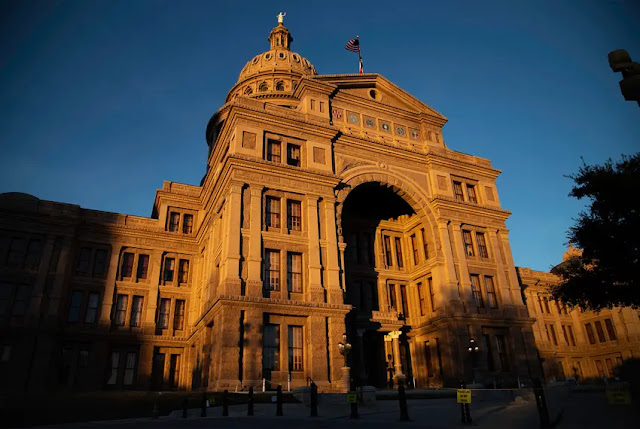 By Ross Ramsey
It’s springtime, and Texas politicians are getting all flirty, dreaming and scheming about what offices they’ll seek in 2022.
Most Texans are still trying to shake off the 2020 elections, with their battles over voting and election law, over the results in tight states — not including Texas — and over the mob that stormed the U.S. Capitol on Jan. 6.
While the rest of us are still in election recovery mode, talk in the ranks of the ambitious is turning to next year. They’re starting to play for the attention of donors and activists now, and making some early moves that, in the best case, might reduce the competition later.
The 2022 ballots in Texas will feature most of the big statewide offices, including governor, lieutenant governor, attorney general, comptroller, and commissioners of the General Land Office, the Department of Agriculture and one of three spots on the Texas Railroad Commission.
Most of the incumbents in those jobs have said nothing at all, or that they’ll be seeking reelection next year. Lt. Gov. Dan Patrick is an example of a twist on that theme, with his proclamation that, despite speculation to the contrary, he will not run against Gov. Greg Abbott. “And I’m not going to be that politician that, a year from now, says, ‘Well, you know, I changed my mind.’”
That may be. Nothing said at this stage of the game is binding, however. This is a time for positioning — for getting a candidate into position to do whatever that candidate decides to do. Names are popping up like spring wildflowers.
Former U.S. Rep. Beto O’Rourke — “Nothing’s changed and nothing I said would preclude me from considering a run in the future” — is a persistent subject of speculation as a Democratic challenger to Abbott, a Republican, after unsuccessful runs for U.S. Senate and the Democratic presidential nomination.
Texas Land Commissioner George P. Bush — “I’m seriously considering a run for attorney general” — is the most prominent current officeholder to challenge a current officeholder from the same party. He’s one of several folks circling Republican Attorney General Ken Paxton, who still faces a 6-year-old indictment on securities fraud charges and who is under federal investigation now after a group of top lawyers at his agency accused him of using his public office for the benefit of a political donor. Paxton has professed innocence in both matters, but the charges and allegations have attracted the political vultures and rivals.
Joe Jaworski — whose Twitter bio includes the line “Democratic Candidate for Texas Attorney General 2022,” in case there were doubts — is a former Galveston mayor and was the first challenger to jump into a statewide race without being cute about it.
Lee Merritt — “I actually accidentally made an announcement yesterday that I was running for Texas attorney general. I intend to run” — is a well-known Dallas civil rights lawyer and a Democrat who is planning a challenge to Paxton.
Mike Collier — launching an exploratory campaign that he says is more accurately called a “confirmatory” effort — a Democrat who lost to Patrick in 2018 by less than 5 percentage points, has all but declared a 2022 attempt at a rematch.
Matthew McConaughey — “It’s a very honorable consideration” — is the celebrity candidate of the season after the Texas actor’s open musing about leadership roles he’s considering for the next chapter of his life.
The list gets longer and longer. Some will blossom; some will wither. Filing for office won’t take place until near the end of the year, at the earliest. If it’s not delayed by redistricting — a real possibility — candidates will have to lock in their real intentions by Dec. 13.
Until then, they are free to speculate, and to test the waters. Current state officeholders can’t raise campaign money — with exceptions for special elections — during a regular legislative session and for a few weeks before and after a session begins. That means people out of office have a small advantage, raising money while officeholders are locked out.
That’s already underway. The fundraising letters, emails and calls haven’t broken into a torrent, but there is already a steady drizzle. It’ll begin in earnest in the last 10 days of June, when the legislative fundraising blackout ends and candidates begin trying to run up their accounting balances before a midyear reporting deadline.
This part of the political season takes place without many serious plays for votes. The candidates are looking for money, for people who’ll take them seriously, or — in the worst case — for signs that it’s just not their time to be asking Texans to put them in charge.
It’s early, and somewhat speculative, but the next elections are already underway.
This article originally appeared at the Texas Tribune.
Opinion