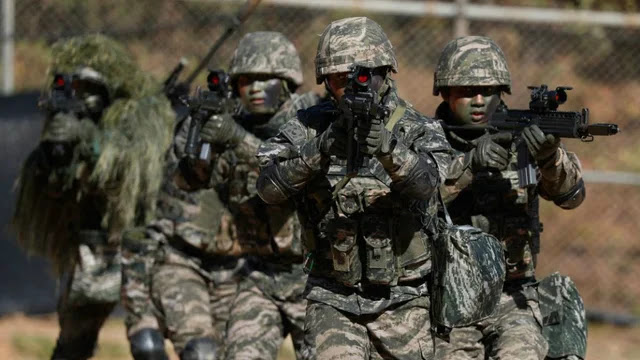 Military officials said on Sunday that the U.S. and South Korea will scale back their annual joint drills this month, citing a combination of the coronavirus pandemic and ongoing diplomatic overtures to North Korea.
Seoul’s Joint Chiefs of Staff (JCS) said in a statement the nine-day exercises will begin Monday and that it has accounted for factors like the pandemic and denuclearization negotiations with Pyongyang, The Associated Press reported. The drills will predominantly be in tabletop and simulation form rather than field training.
A South Korean Joint Chiefs of Staff officer told the AP this year’s drills will “minimize” the number of troops actively involved, citing the pandemic. The officer added that the two nations have instead staged field exercises throughout the year rather than holding larger annual drills.
An outbreak led to the cancellation of the spring exercises in 2020 after several years of lower-key exercises amid U.S. diplomatic efforts to engage with North Korea.
The North has long denounced the drills as a threat, with Chairman Kim Jong Un saying in January that talks with the U.S. could only restart if the exercises are cancelled. Talks between Washington and Pyongyang have been in stasis since February 2019, when a meeting between then-President Trump and Kim ended without any diplomatic breakthrough.
Seoul and the U.S. are “comprehensively taking into consideration the COVID-19 situation, the maintenance of the combat readiness posture, the denuclearization of the Korean Peninsula and the establishment of peace,” the South Korean JCS said in a statement on Sunday, according to Reuters.
The news service noted that Chad O’Carroll, CEO of Korea Risk Group, said on Twitter that there was “too much on the domestic agenda going wrong to risk any significant tit-for-tat escalation,” adding “this is a government which tends to focus most of its resources on dealing with one key issue at a time.”
World