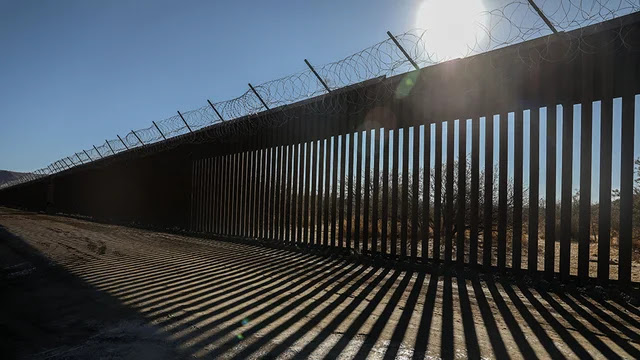 U.S. Border Patrol agents rescued two toddlers from a “potentially life-threatening situation” near the U.S.-Mexico border on Tuesday after they were dropped over a 14-foot wall by smugglers who then fled.
Two girl toddlers were rescued in Santa Teresa, New Mexico on Tuesday evening according to U.S. Customs and Border Patrol (CBP). A Santa Teresa Border Patrol agent observed the smugglers dropping the two children over the wall who then directed agents to their location.
In a video, an adult can be seen sitting on top of the wall as they drop the two children to the ground. The first child appears to be stunned for a moment, not moving after they hit the ground. After they drop the second, a small package is thrown over the wall with them.
The children are sisters, both Ecuadorian, aged 3 and 5 years old.
After being rescued, the children were taken to the Santa Teresa Border Patrol Station for medical evaluation and were later taken to a hospital for further observation. They are currently in Border Patrol temporary holding as they wait for placement by Health and Human Services.
“I’m appalled by the way these smugglers viciously dropped innocent children from a 14-foot border barrier last night. If not for the vigilance of our Agents using mobile technology, these two tender-aged siblings would have been exposed to the harsh elements of desert environment for hours,” El Paso Sector Chief Patrol Agent Gloria I. Chavez said. “We are currently working with our law enforcement partners in Mexico and attempting to identify these ruthless human smugglers so as to hold them accountable to the fullest extent of the law.”
National