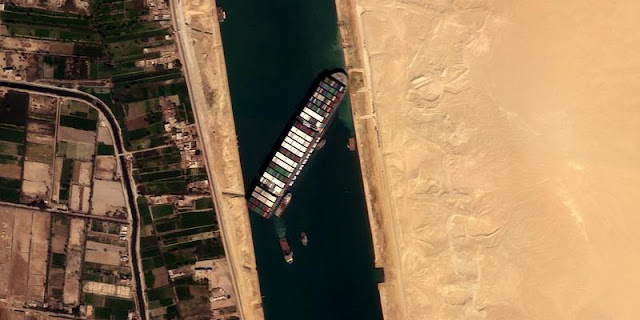 A massive container ship is still stuck in the Suez Canal Sunday morning as efforts to oust the stranded vessel entered its sixth straight day.
Reuters reported that massive pileups continued as ships from around the world wait to pass through the blocked canal, one of the world's most important waterways. As many as 321 vessels were waiting to pass through the canal.
Dredgers and other machines are being used to remove sand and rock from around the bow of the stranded ship, but reportedly encountered a mass of rock that complicated removal efforts, according to the news service.
“The rudder was not moving and it is now moving, the propeller is working now, there was no water underneath the bow, and now there is water under it, and yesterday there was a 4-metre deviation in the bow and the stern," the head of the Suez Canal Authority reportedly told Egyptian state TV.
“We’re dividing the day into two halves, 12 hours for dredgers and 12 hours for tugs, because not all times are suitable for tugs due to the tide,” they added.
Experts are now looking at the possibility of being forced to remove some of the Ever Given's cargo in order to help refloat the ship, an effort that would likely be time-consuming and costly.
U.S. officials have reached out to their Egyptian counterparts to offer assistance on the issue, White House press secretary Jen Psaki said on Friday.
"As part of our active diplomatic dialogue with Egypt, we've offered U.S. assistance to Egyptian authorities to help reopen the canal. We are consulting with our Egyptian partners about how we can best support those efforts,” she said.
World