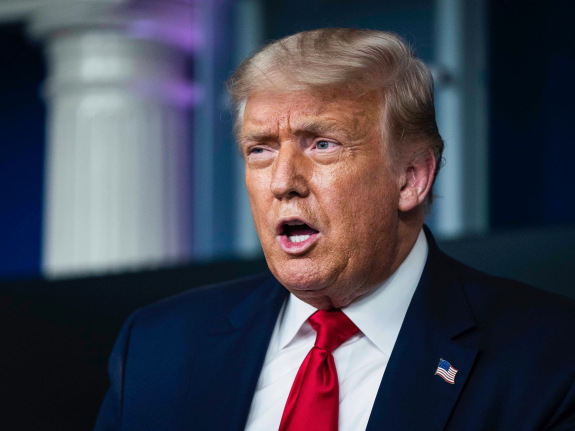 Former President Trump in an interview released Monday said that the Republican Party has a “pretty deep bench” if he decides not to seek a return to the White House in 2024.
“I'll make that decision sometime later, but there's a pretty deep bench,” Trump told the podcast “The Truth with Lisa Boothe."
The former president said the Republican Party “is stacked” with “very good people” heading into upcoming elections. He specifically named Florida Gov. Ron DeSantis, South Dakota Gov. Kristi Noem, Sen. Josh Hawley (Mo.), Sen. Ted Cruz (Texas), Sen. Rand Paul (Ky.) and his former press secretary Sarah Huckabee Sanders, who is running for governor in Arkansas.
When asked who would be the GOP presidential candidate if Trump decides against running, the former president said “some of the names, I guess I just mentioned perhaps,” adding that “there's a pretty deep bench” of potential candidates.
“I think we’ve got a lot of great people in the Republican Party,” he said.
Trump cited the Conservative Political Action Conference’s (CPAC) straw poll that found a 97 percent approval rate for the former president’s job performance.
The CPAC poll also gauged support for potential candidates in the 2024 presidential election, with 55 percent of respondents saying they’d vote for Trump in a theoretical primary. In the poll that excluded Trump as a possible candidate, DeSantis showed a wide lead with 43 percent support, followed by Noem.
At the conference, Trump teased another presidential campaign during his speech but has not officially said whether he will enter the race.
National