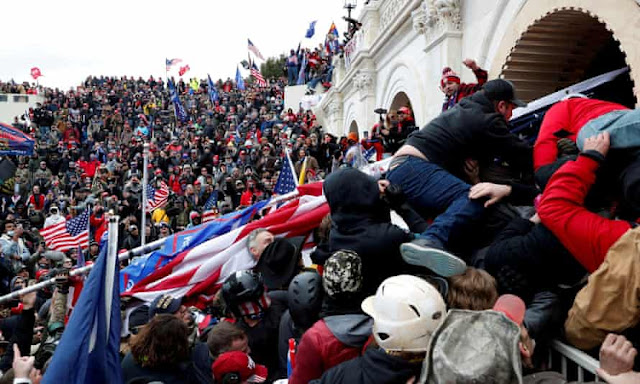 Former President Trump said Thursday that the rioters who stormed the U.S. Capitol on Jan. 6 posed "zero threat" to those inside the building.
During a phone interview on Fox News's "Ingraham Angle," the former president said that the protective fencing that had been put in place around the Capitol after a mob of pro-Trump supporters breached Capitol security in January was "disgraceful."
"I think it's disgraceful — it looks, for the world to watch — absolutely, it's a political maneuver that they're doing. It was zero threat right from the start, it was zero threat," Trump said.
Following a speech from Trump at the White House Ellipse on Jan. 6, a group of his supporters marched to the Capitol and breached security with the aim of halting Congress's certification of President Biden's Electoral College win.
The attack on the Capitol left several people dead, including Capitol Police officer Brian Sicknick. Offices in the Capitol were ransacked, and lawmakers, staff and journalists were forced to hide and evacuate.
Video from the scene showed rioters chanting about hanging former Vice President Mike Pence, and some discussed locating and harming Speaker Nancy Pelosi (D-Calif.).
However, the former president told Fox News host Laura Ingraham that the rioters were "hugging and kissing" police upon entry.
"Look — they went in, they shouldn't have done it. Some of them went in and they're hugging and kissing the police and the guards. They had great relationships," Trump said.
Some Capitol police officers are under investigation for alleged actions supporting the Capitol breach, including an officer who may have taken a selfie with one of the rioters.
"A lot of the people were waved in and then they walked in and they walked out," he continued. "They're persecuting a lot of those people. And some of them should be — some things should happen to them, but when I look at antifa in Washington even, what they did to Washington and what they did to other locations and the destruction and frankly the killing and the beating up of people ... why aren't they going after antifa?"
Trump was referencing the loosely organized anti-fascist movement that both Trump and some of this allies have claimed were responsible for the Capitol attack as well as behind the Black Lives Matter protests last summer.
The FBI has made hundreds of arrests and charged suspects in connection to Jan. 6 riot. Many of those arrested have connections to far-right groups such as the Proud Boys or the Oath Keepers.
Trump was impeached for a second time in the House for his role in inciting an insurrection at the Capitol that day. He was later acquitted in the Senate.
The comments from Trump come after several House committees have asked the White House and 16 other agencies to turn over documents related to the Jan. 6 attack from the Trump administration.
The request, spearheaded by the House Oversight and Reform Committee, asks White House chief of staff Ron Klain to share documents relating to "the counting of the Electoral College vote on Jan. 6 or the potential for demonstrations, violence or attacks in the National Capital Region.”
National