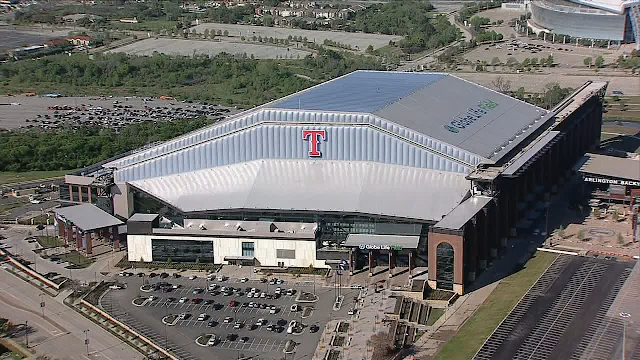 The Texas Rangers plan to allow 100 percent attendance for their April 5 home opener against the Toronto Blue Jays, the team announced on Wednesday.
The Rangers became the first major professional team to declare plans to permit 100 percent stadium capacity. They plan to have up to 40,518 fans, who will be required to wear masks, in the stadium for the April 5 game.
The team cited Texas Gov. Greg Abbott’s (R) order permitting the state to fully reopen in its announcement.
“The Rangers are encouraged that the Governor’s Office has given clearance for us to fully open Globe Life Field at the start of the 2021 Major League Baseball season,” Neil Leibman, the president of business operations and chief operating officer, said in a statement.
The Rangers plan to sell single-game tickets to fans for the March and April home games at Globe Life Field.
The Texas Rangers Baseball Foundation plans to reach out to organizations to give free tickets to front-line workers, such as hospital workers, first responders, teachers, grocery store workers, military service members and workers for the Federal Emergency Management Agency who staffed vaccination sites.
Health protocols released Wednesday indicate that fans have to wear masks except when “actively” eating or drinking at their ticketed seats, and tailgating is banned.
For all April games, except the home opener, Globe Life Field will offer “distanced seating” sections for fans who desire more space between taken seats.
Leibman noted that the Rangers are working with MLB on “some additional protocols required for player health and safety.”
“We will continue to monitor developments and implement the necessary public health measures,” he said. We are excited that Rangers fans will finally be able to experience all that Globe Life Field has to offer.”
The team's announcement comes about a week after Abbott declared that the state could fully reopen, ending the statewide mask mandate and capacity limits for businesses.
President Biden has called Texas's and Mississippi's decisions to drop the mask mandates a "big mistake" and a form of "Neanderthal thinking."
Texas