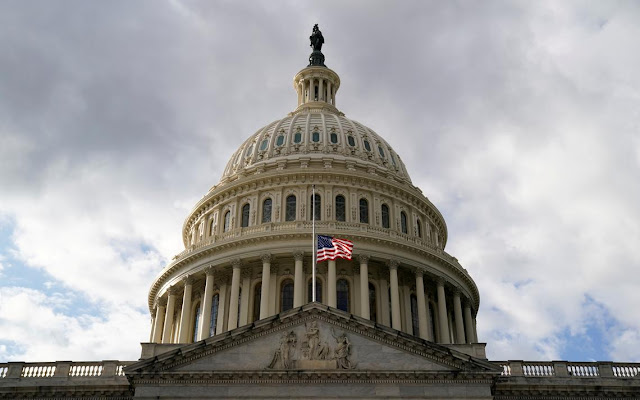 Senate Republicans are split on whether to embrace or reject the return of earmarks as the caucus leans into deficit concerns under the Biden administration.
With House Republicans voting last week to join congressional Democrats in supporting the return of the federal spending, which allows members to secure money for specific projects back home, the Senate Republican Conference is now the odd person out on Capitol Hill.
But there are sharp lines of division about the path forward, with conservatives pledging to fight any decision by leadership to return to earmarks and top appropriators signaling a willingness to reengage.
“I don’t know, it’s controversial over here. We have people with strong views on both ways,” Senate Minority Whip John Thune (R-S.D.) said when asked what his colleagues would do in the wake of the House decision.
Senate Minority Leader Mitch McConnell (R-Ky.), during a recent interview with Fox News, signaled that members of his caucus would take a hard line, saying earmarks were “very unpopular among Republicans.”
“I think we’re very unenthusiastic. There may be some Republicans interested in that sort of what’s called congressionally directed spending. It doesn’t enjoy much support among Republicans,” McConnell said.
McConnell was previously a proponent of earmarks but warned that, speaking for the entire caucus, there was now broad opposition. The Senate GOP banned earmarks in 2010 with Democrats following suit in 2011 amid pressure from then-President Obama and House Republicans who, amid a rise in concern about the deficit, had homed in on the pet projects.
McConnell’s assessment is backed up by conservatives in the caucus, who are warning their colleagues against embracing what they view as wasteful spending. The caucus voted in 2019 to permanently ban earmarks after a previous moratorium expired.
Sen. Ted Cruz (R-Texas) called the decision by House Republicans to lift the ban on earmarks a “serious mistake” and “unfortunate.”
“Earmarks played a major role in the out-of-control spending that we have in Washington, and they play a major role entrenching the swamp,” Cruz told reporters.
Conservatives have been sending warning signs for weeks telegraphing their opposition to bringing back earmarks.
Cruz was one of dozens of congressional Republicans who sent a letter earlier this month to top Democrats on the House and Senate appropriations committees urging them against bringing back earmarks, saying that earmarks had been “rejected as corruptive and wasteful” and that it would be a “grave mistake.”
A group of GOP senators also introduced legislation to permanently ban earmarks.
Sen. Ron Johnson (R-Wis.), one of the co-sponsors of the bill, said he was “surprised” that House Republicans agreed to allow earmarks.
“They shouldn’t have done it. ... That’s not the right direction to go,” Johnson said.
But support for returning to the spending has been growing around Capitol Hill over a belief that they could help garner buy-in for big bills amid growing gridlock in Congress.
House Democrats announced last month that they were officially bringing back earmarks, but there will be restrictions including a limit on the number a member can request, a requirement that they post it online and a ban on members requesting money if they have a financial connection to a project.
Senate Appropriations Committee Chairman Patrick Leahy (D-Vt.) indicated that he was also interested in resuming the practice — with or without Republicans.
“I’m perfectly willing to have designated spending. It wouldn’t be that large amount of money. I’m perfectly willing to divide it equally between Republicans and Democrats. And so it will be up to them if they want it,” Leahy said.
“If they don’t, we’ll just have it on the Democratic side. But I think enough of them would like to have it on both sides,” he added.
Some Republicans have signaled an openness to allowing earmarks, with some caveats.
Sen. Susan Collins (Maine), a moderate GOP senator and member of the Appropriations Committee, told reporters recently that she would be open to bringing back earmarks.
“The key with congressionally directed spending is that it should be posted. The sponsor’s names should be attached. It should not be airdropped in conference,” Collins said.
“Why Congress ever wanted to give away its spending authority to people who are not elected and not responsible for these decisions, it’s beyond me,” she added.
Sen. Richard Shelby (Ala.), the top Republican on the Appropriations Committee, is in talks with Leahy about how it would work. He said that it was “a given” that congressionally directed spending previously helped ease passage of government funding bills but warned that Congress will have to be careful to not “misuse” them.
“It ought to be only meritorious, substantive in nature,” Shelby said. “If you find really good projects that are meaningful for various states and their communities, that’s different. But I think you got to look at the merits.”
“I think we’ve got a constitutional right to do that,” Shelby added, “to control the money.”
National