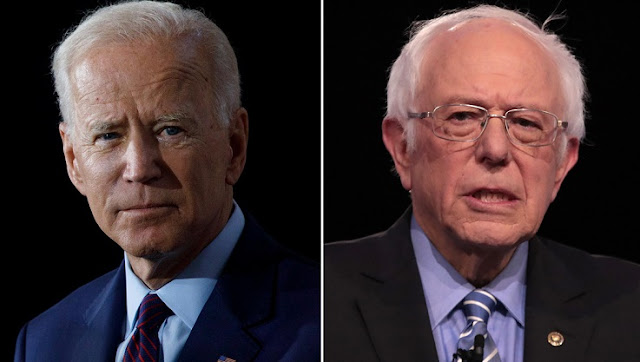 Senate Budget Committee Chairman Bernie Sanders (I-Vt.) is pushing a more aggressive approach to taxing companies and wealthy families, creating a new problem for President Biden.
New proposals from Sanders go well beyond the revenue-raising measures Biden proposed in his campaign, which already would not completely pay for the $3 trillion package he is reportedly considering to rebuild the nation’s infrastructure.
In one piece of legislation unveiled Thursday, Sanders proposed raising the corporate tax rate from 21 percent to 35 percent, well above the 28 percent level Biden has proposed, and adding stricter measures than Biden proposed for taxing offshore profits.
A second bill would put in a more stringent estate tax, lowering the threshold for when an estate would be hit with the tax from $11 million to $3.5 million for single people and from $22 million to $7 million for couples. He’d also raise the tax rate to as much as 65 percent for estates over $1 billion.
Biden’s proposal also would tax estates valued at $3.5 million or more, but his estate tax rate is a flat 45 percent.
Sanders signaled that Biden and Democrats should be willing to be much bolder in taxing corporations and estates to pay for their priorities.
“We can no longer tolerate many large corporations making billions of dollars in profits to pay nothing in federal income taxes while about half of older Americans have no retirement savings and no idea how they will be able to retire with any shred of dignity or respect,” Sanders said at a Budget Committee hearing on the subject.
The proposals underscore how Sanders is continuing to push Biden to the left, as he did during the presidential primary race when he finished second to the president.
But the pressure creates a number of problems for Biden, who is seeking to pass legislation through a Senate with 50 Democrats and 50 Republicans.
If Biden does pursue the $3 trillion infrastructure and climate change package being contemplated, it’s not clear how much he’ll seek to pay for and how much will add to the deficit.
The White House is contemplating working with Republicans on at least part of the package to win a bipartisan victory, something some centrist Democrats have pressed him to do.
The package is intended to rebuild infrastructure and help Americans dealing with poverty.
It seems likely to be split into a $2 trillion infrastructure bill and a $1 trillion social bill dealing with education, child care and anti-poverty measures.
Bidden quickly gave up on getting GOP support for the rescue plan after determining that Republicans were not willing to go as big in the legislation as he wanted. Instead, the bill advanced through a budgetary process that only required a 50-vote majority in the Senate plus Vice President Harris’s tie-breaking vote.
He could choose the same route with the new package, but doing so would likely leave dead any hopes for a bipartisan compromise with Republicans.
It would also give more leverage to Sanders, since in such a situation Biden could not afford to lose a single Democratic vote in the Senate. Sanders's position atop the committee that oversees the reconciliation process gives him an extra lever to pull in policy talks.
Republicans and budget hawks increasingly are raising concerns about rising red ink, which could make it difficult to win any bipartisan deal. With the passage of the $1.9 trillion American Rescue Plan this month, the deficit is on track to surpass the $3 trillion record it set last year and push the country’s debt burden to its highest point in history, previously set during World War II.
“We have engaged in an unprecedented amount of borrowing over the past year, which is exactly what we should have been doing,” said Maya MacGuineas, president of the Committee for a Responsible Federal Budget, in testimony before the committee Thursday.
The debt implications, however, are coming home to roost.
“This debt trajectory leaves us vulnerable on many fronts: it leaves people who depend on these important trust fund programs vulnerable given all the uncertainty; it leaves the economy vulnerable to economic shifts both here and abroad; and it creates a major national security threat as well," MacGuineas said.
The GOP itself passed $1.9 trillion in unfunded tax cuts in 2017 that added to the deficit. But it is unlikely to back new legislation that would add more spending that is unpaid for.
“In 2017 we did in fact cut taxes. We cut taxes in a way to make American corporations competitive with the worldwide rate,” said Sen. Lindsey Graham (R-S.C.), the top Republican on the Budget panel.
“This insatiable desire by my friends on the left to grab as much money and power as they can is going to ruin the country. There has to be some balance,” he added.
Sanders has shown that he can be a team player in the right circumstances. He voted for the American Rescue Plan despite his signature $15 minimum wage policy being stripped out, vowing to pursue it further down the line.
But his Thursday push makes it clear that if Biden bends too far toward GOP demands, he will get pushback from his party’s own progressive flank. That could pose a problem for Biden in the House as well, where Democrats hold a razor-thin margin. Earlier this month, Congressional Progressive Caucus Chairwoman Pramila Jayapal (D-Wash.) signed on to Sen. Elizabeth Warren's (D-Mass.) wealth tax proposal, another approach Biden has rejected.
Sanders also made it clear that he sees the issue not so much as a matter of paying for favored policies, but in creating a more equitable society.
“Despite what some of my Republican colleagues may claim, the reality is that when you take into account federal income taxes, payroll taxes, gas taxes, sales taxes and property taxes, we have, as a nation, an extremely unfair tax system that allows billionaires to pay a lower effective tax rate than public school teachers, truck drivers and nurses,” he said. “That has got to change.”
National