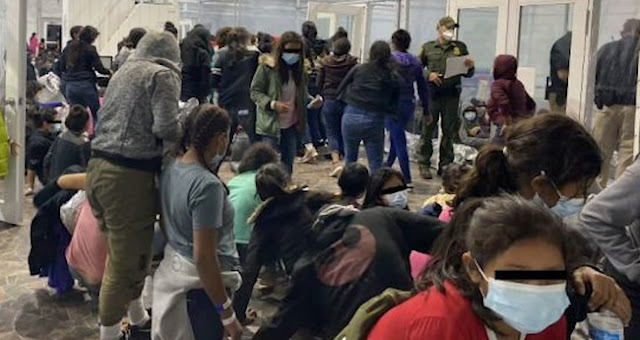 Photos released by Rep. Henry Cuellar's (D-Texas) office on Monday revealed crowded conditions in a temporary Customs and Border Protection (CBP) facility as the number of migrants trying to cross the southern border grows.
The photos taken over the weekend show the makeshift accommodations for migrant children in an overflow facility in Donna, Texas.
Many of the migrants are wearing masks, but are placed closely together amid the COVID-19 pandemic inside rooms walled off by what appears to be a clear tarp-like material.
The Biden administration has not allowed independent journalists to visit the migrant holding facilities. Some lawmakers like Cuellar have visited the sites, however.
A spokesperson for Cuellar declined to say who provided the photos to the border-district lawmaker.
Cuellar told Axios, which first obtained the photos, that the facility amounted to "terrible conditions for the children" and that they should be moved into care from the Department of Health and Human Services instead of Customs and Border Protection.
Homeland Security Secretary Alejandro Mayorkas said on CNN's "State of the Union" on Sunday that the Biden administration is "working around the clock to move those children out of the Border Patrol facilities into the care and custody of the Department of Health and Human Services that shelters them."
"I have said repeatedly from the very outset that a Border Patrol station is no place for a child," Mayorkas said.
The Homeland Security secretary cited the ongoing COVID-19 pandemic for declining to allow reporters to view the southern border facilities, including during a visit with a bipartisan group of senators last week.
Mayorkas also told "Fox News Sunday" that the administration is "working on providing footage so that the American public can see the Border Patrol stations."
CBP announced the opening of the Donna facility in February to provide extra processing capacity for migrants in its custody while a permanent processing center in McAllen, Texas, is undergoing renovations.
CBP said at the time that the Donna facility was "weatherproof, climate-controlled, and is expected to provide ample areas for eating, sleeping, and personal hygiene."
Mayorkas acknowledged last week that the number of attempted crossings at the U.S. southern border is expected to reach its highest level in 20 years.
The Biden administration is deporting most single adults and families attempting to cross the border illegally, but not unaccompanied children.
When asked about the images of the facilities provided by members of Congress, White House press secretary Jen Psaki told reporters on Monday that the photos "show what we've long been saying, which is that these Border Patrol facilities are not places made for children."
Psaki said that the Biden administration is working on expediting processing at the border and opening new facilities.
"Our alternative is to send children back on this treacherous journey. That is not, in our view, the right choice to make," Psaki said.
Texas World