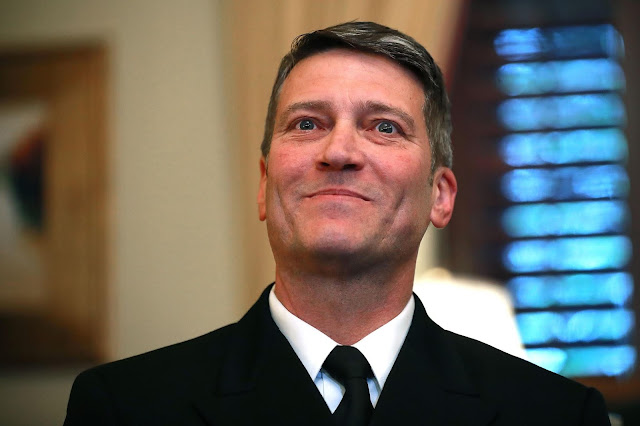 The Department of Defense is preparing to release a blistering report detailing Rep. Ronny Jackson’s (R-Texas) time as the top White House physician during the Obama and Trump administrations.
According to the report from the Pentagon’s inspector general, a copy of which was obtained in advance by CNN, Jackson made "sexual and denigrating" comments about a female colleague, drank alcohol while on presidential trips in violation of protocol and took prescription-strength sleeping medication that made coworkers worried about the care he could provide.
The report is the culmination of an investigation that started in 2018.
It alleges that Jackson had a fiery temper, with interviewees telling the Pentagon watchdog that he would be heard “yelling, screaming, cursing, or belittling subordinates.”
He also was seen drinking on presidential trips, including one in 2014 to Manila during which he became apparently was intoxicated and made inappropriate remarks about a female colleague working under him. Similar remarks were allegedly heard on other trips as well.
At least six interviewees told the inspector general that Jackson also took Ambien on long flights while he was on duty, leaving them concerned that he would be unable to provide care due to the drug’s ability to cause drowsiness and reduce alertness.
In a statement, Jackson panned the report as an attempt by Democrats to tarnish him. Jackson retired from the Navy in 2019 and won his Texas House seat last year.
“Three years ago I was the subject of a political hit job because I stood with President Trump. Today, a Department of Defense Inspector General report has resurrected those same false allegations from my years with the Obama Administration because I have refused to turn my back on President Trump.
“I’m proud of the work environment I fostered under three different Presidents of both parties; I take my professional responsibility with respect to prescription drug practices seriously; and I flat out reject any allegation that I consumed alcohol while on duty.
"My entire professional life has been defined by duty and service. I’ve honorably served my country in the U.S. Navy, served patients who trusted me with their care, served three Presidents in the White House, and now I serve the people of Texas’ 13th District in Congress.
"I have not and will not ever conduct myself in a way that undermines the sincerity with which I take my oath to my country or my constituents," Jackson said.
Local