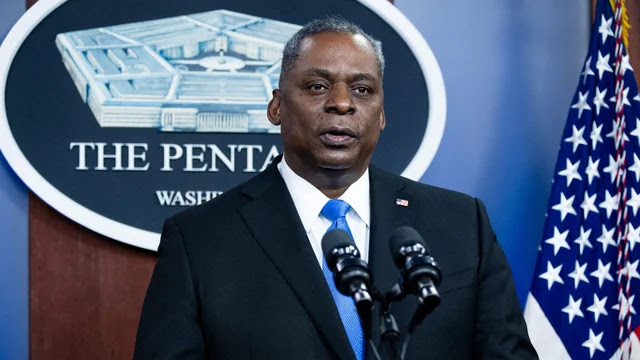 Defense Secretary Lloyd Austin has called on the U.S. military to reaffirm its core values and ethical conduct, according to a memo released Tuesday.
“As members of the Department of Defense who serve in or support the most powerful military in the world, we represent not only the determination of our country to secure its interests, but also the core values upon which this country and our armed forces were founded,” Austin wrote in the document, dated Monday.
“None of those values is new to us: honesty, integrity, character and selflessness all rank high on the list,” he continues. “I know you treasure these values just as much as I do. I know you believe in them just as much as you believe in the oath you took - the promise you made - when you raised your right hand to serve. And I know I can count on you to conduct yourselves always in a manner that leaves no doubt of your fidelity.”
The memo was released as the Pentagon is grappling with issues related to the military's culture and character, including sexual assault and harassment, extremism and racism.
On Tuesday, members of a congressionally mandated commission tasked with planning how to rename Confederate-named military bases were sworn-in at the group’s first meeting, according to the Army.
Last week, the Pentagon launched a civilian-led commission to address the pervasive problem of sexual assault in the military.
And Austin early last month ordered that all military units conduct a one-day stand down to address extremism within the ranks.
In the memo, Austin describes ethical conduct as “demonstrating in real and meaningful ways the degree to which we take seriously our role as good stewards of the taxpayers' dollars and of their trust and confidence,” as well as “rededicating ourselves, constantly, to the privilege of being public servants.”
“I share President Biden’s commitment to restoring and maintaining public trust in government.”
He also lists four expectations for the workforce, including completing the Pentagon annual ethics training by Nov. 30; ensuring that DOD financial and operational processes, reporting, systems, and data are accurate, reliable, and secure; preventing fraud, waste, and abuse; and making “ethical decision-making an integral part of our daily conversations, meetings, and engagements.”
“We must ask ourselves at every point in our processes and procedures: Is this the right thing to do ... and are we going about it in the right way?”
National