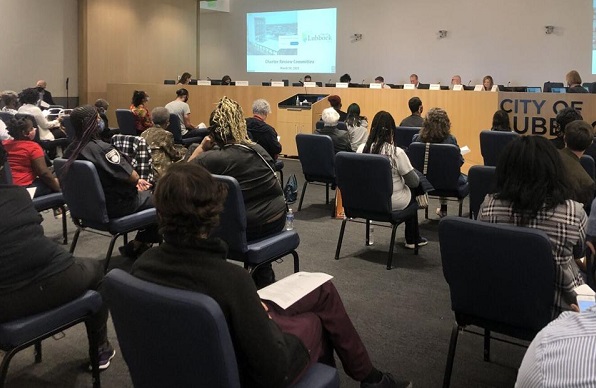 On Tuesday evening, a committee took the first steps toward making significant changes to the city's charter. It would be the first time in more than a century, certain items are being considered for an update, including council pay.
"It's been a long time since it's been changed. It goes back over 100 years," charter review committee chairman James Arnold said.
City council appointed each committee member. Mayor Dan Pope selected Arnold for his position.
A chamber full of concerned citizens attended the first public hearing. Many, representing or encouraged by the grassroots advocacy group called Lubbock Compact.
They see this as an opportunity to advance the city in a more progressive direction.
"We need someone that's willing to modernize Lubbock, to help us get up to speed," lifelong Lubbockite Josie Mitchell said.
"We haven't defined what we're going to consider yet. Tonight's just kind of the first step in hearing from citizens, nobody on the charter review committee has an agenda," Arnold explained.
Possible changes include extending the mayoral term and pay raises for all seven members of council. As it stands now, the mayor earns $900 dollars a year and each council member $300 a year.
"So, it leaves it open only to the independently wealthy, retired or people who may have some funds behind them, which is always a problem," resident Jim Beck said.
Most at the meeting supported an increase to a livable wage.
"As it's been stated so far, it is a full-time job. Someone might not get paid as a full-time job, I have no complaints over that," Mitchell said.
But the biggest point of contention was the possibility of adding two "at-large" council members, who would not represent any particular district.
That was the norm in Lubbock until 1994, when a court struck it down.
"To add two members, in my opinion and many other people's opinions, would be taking us backwards in history, to pre-1984 context," Beck said. "That would be leaning the city of Lubbock and the decisions of Lubbock in an unfair, unjust, inequitable context," he added.
But Arnold clarified, following the public's comments that, that will not be a possibility moving forward.
"Whether or not we pay a living wage or what we do there, that is up for discussion with this committee but adding at large districts is not in our scope as we move forward. So, I wanted to make everyone aware of that, spread the word, let everybody know that," Arnold said.
A second meeting will take place in mid-April and will also have a zoom link for those unable to attend in person.
The committee will then put together its suggestions for city council in the coming months. It is then up to the council to decide what items make it onto the ballot, if any do,  in November.
Local