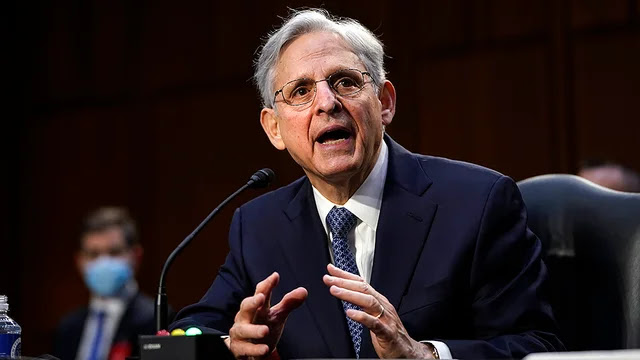 The Senate Judiciary Committee voted Monday to approve Merrick Garland’s nomination for attorney general, teeing him up to be confirmed by the Senate as soon as this week.
The panel voted 15-7 in favor of President Biden’s pick to lead the Justice Department. GOP Sens. Mike Lee (Utah), Ted Cruz (Texas), Ben Sasse (Neb.), Josh Hawley (Mo.), Tom Cotton (Ark.), John Kennedy (La.) and Marsha Blackburn (Tenn.) voted against his nomination. Cruz, Sasse, Cotton and Hawley are each viewed as potential 2024 presidential contenders.
The vote comes nearly five years after Republicans blocked Garland from getting a hearing or a vote for his 2016 Supreme Court nomination, and is the first nomination cleared by Democrats since the party took over the committee.
Garland is expected to easily be confirmed by the full Senate, despite the GOP opposition in committee. A final confirmation vote hasn't been scheduled, but could happen as soon as this week.
Democrats only need 50 votes in order to confirm Biden’s nominees because Vice President Harris could break a 50-50 tie.
No Democrat has said that they will oppose Garland and he’s expected to get GOP support on the Senate floor. Minority Leader Mitch McConnell (R-Ky.) says he supports the nomination and top Republicans on the panel, including Sen. Chuck Grassley (R-Iowa), voted to advance his nomination on Monday.
The committee vote came one week after Garland testified during an hours-long Judiciary Committee hearing, where he pledged to be politically independent from Biden.
Garland is poised to take over a Justice Department battered in recent years by political scandals and viewed by lawmakers in both parties as being increasingly politicized.
“I am the United States lawyer. I will do everything in my power … to fend off any effort by anyone to make prosecutions or investigations partisan or political in any way,” Garland said at his hearing.
Garland also fielded questions on police reform, controversial investigations into the Russia probe and Hunter Biden, limits on a president’s power and domestic terrorism in the wake of the Jan. 6 Capitol attack.
Garland, as attorney general, will oversee a weeks-old wide-ranging investigation into the pro-Trump mob breaching the Capitol building in an effort to stop the counting of the Electoral College vote.
“One of the very first things I will do is get a briefing on the progress of this investigation,” Garland told senators.
National