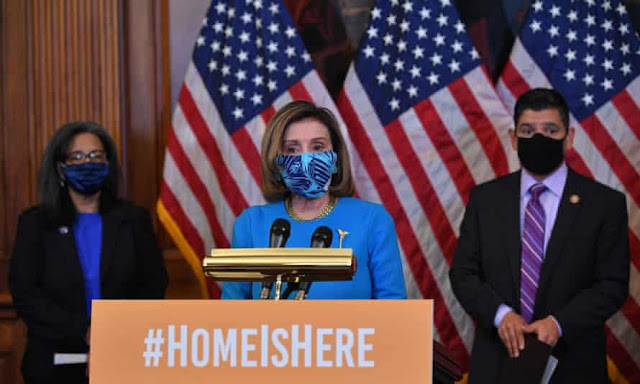 House Democrats passed a pair of bills Thursday that would create a pathway to citizenship for Dreamers and some migrant farm workers, taking a piecemeal approach as the fate of President Biden’s major immigration package looks increasingly uncertain.
The Dream and Promise Act, which passed 228-197, would provide certainty to undocumented people brought to the U.S. as children whose ability to go to school, get work and even remain in the country has hung in the balance from administration to administration.
Sponsor Rep. Lucille Roybal-Allard (D-Calif.) called the bill “a major step in ending the veil of fear and uncertainty that has plagued the lives of our Dreamers for far too long.”
But beyond assisting Dreamers, the legislation would also allow those with Temporary Protected Status (TPS) to apply for citizenship, a group from countries around the world that ranges from those fleeing civil unrest and natural disasters as early as the 1990s to Venezuelans deemed eligible for the status by the Biden administration earlier this month.
In total, the Dream and Promise Act would help naturalize nearly 4.5 million people.
If approved by the Senate, the legislation would cap a longstanding goal for Democrats, who have been eager to cement status for Dreamers, as former President Obama’s 2012 Deferred Action for Childhood Arrivals (DACA) program has been repeatedly challenged in court.
But the prospects for getting the “immigration week” legislation to Biden's desk have been complicated by a surge at the southern border, with Republicans expressing hesitation for passing any immigration reform before dealing with that situation first.
“Biden has lost control of the U.S.-Mexico border,” Sen. Lindsey Graham (R-S.C.) said Wednesday.
“Until he regains control, by implementing policies that work, it will be hard to do the Dreamers or anything else.”
Meanwhile a Republican immigration package introduced Wednesday, which would also provide citizenship to Dreamers, includes a trigger mechanism to “ensure border security is completed before other reforms take place.”
During House debate on the bill, Republicans frequently referenced a “crisis at our southern border," arguing the Biden administration is encouraging increased migration.
“We are beyond the debate. The question is whether we have a border at all. What's the Democrats' response? This bill promises a path to citizenship to DACA recipients but millions more,” Rep. Tom McClintock (R-Calif.) said.
“We all sympathize with those illegally brought here as young children years ago,” he said, noting Republican support for other bills that protected Dreamers but included border security measures that “discourage another generation of young people being brought here.”
Apprehensions at the southern border increased 28 percent from January to February, to more than 100,000 people, according to the U.S. Border Patrol, and the Department of Homeland Security on Tuesday said that the U.S. is “on pace to encounter more individuals on the Southwest border than we have in the last 20 years.”
While the White House has blamed the pressure on the border on former President Trump’s policies, Republicans have repeatedly claimed the Biden administration is undermining what had been a stable situation.
“How did we go from America first to America last in just days,” Rep. Jodey Arrington (R-Texas) said during the debate.
Democrats said the case for Dreamers was one based on compassion, economics and the American history of immigration.
“They have so much to contribute, and they're American in every way except on paper. For so many long years they've been burdened with uncertainty because of the anti-immigrant hysteria whipped up by these Republican fanatics,” Rep. Lloyd Doggett (D-Texas) said on the floor.
“Releasing their full potential would have such benefit to all of us.”
Democrats also contend that the pandemic has shown the value immigrants play both as essential workers and drivers of the economy.
“Recipients are essential to our communities. Many of them have lived in the United States for decades. They make up a significant portion of the workforce in key industries including construction, food service, and home health care. They contribute to the U.S. economy not only through their work, but also through consumer spending and tax revenue, and they have been particularly essential in serving our country during the COVID-19 pandemic,” House Judiciary Committee Chairman Jerry Nadler (D-N.Y.) said during the debate.
“This legislation is not about the border. This legislation is about finally delivering on our promise to America's Dreamers and others who are equally deserving of our protection,” Nadler said.
The House on Thursday also approved legislation that provides a citizenship pathway for seasonal migrant farmworkers, allowing those who have been traveling to the U.S. for work for a decade to apply for citizenship after another four years.
That bill, which passed 247-174, is expected to provide citizenship to more than a million migrants, and it also ups the number of agricultural visas available to those seeking to come to the U.S. for work.
It secured more Republican support, including several votes from agricultural communities.
“For years my constituents have been asking me to fix our nation's broken immigration system. They say it's wreaking havoc on our farmers in rural communities,” said Rep. Mike Simpson (R-Idaho), noting the difficulty of securing workers.
“We created a bill to create a merit-based agricultural immigration system for our nation's food producers and make much-needed reforms….This bill is not about what is happening on the border,” Simpson said. “It's about providing a stable, legal workforce for the people who put food on our tables.”
Though the two bills together would provide a substantial number of migrants with the ability to naturalize, it falls short of the 11 million figure that would be covered by a major immigration package pushed by Biden.
Though the White House issued statements of support for both bills, it also urged the passing of Biden’s bill, stressing the need “to reform other aspects of our immigration system.”
National