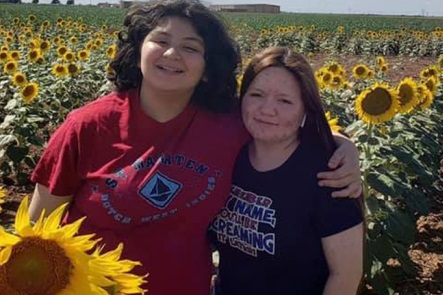 The Post Volunteer Fire Department, the Garza County Sheriff’s Office, Post-Garza EMS and later the State Fire Marshal’s office responded to a deadly fire Tuesday late afternoon. Sheriff Terry Morgan said the fire was reported at 4:40 p.m. in the 100 block of North G Place.
Morgan said a trailer home on caught fire. He said two individuals inside the home died. Social media accounts indicated two girls died, but the sheriff did not confirm specific details about the victims.
Later on Wednesday morning, Mike Isbell, the Garza County Emergency Coordinator, confirmed the the two victims as Rayven and Avery Soto.
A family member posted to social media, saying with the permission of the girls’ mother:
Post High School, Middle school and our community lost two precious souls yesterday.
Rayven Soto was a sophomore at PHS and her sister Avery, a 6th grader at PMS. Please keep their mom and sister in prayer! Lots and lots of love and prayers sent their way. Prayers to Their whole family.. school family and friends.
Below you will also find a list of what the family needs since they have lost everything. Happy Heavenly Birthday, Rayven!
An autopsy was scheduled in Lubbock for Wednesday. The fire marshal has not yet determined the cause of the fire, Morgan said.
Local