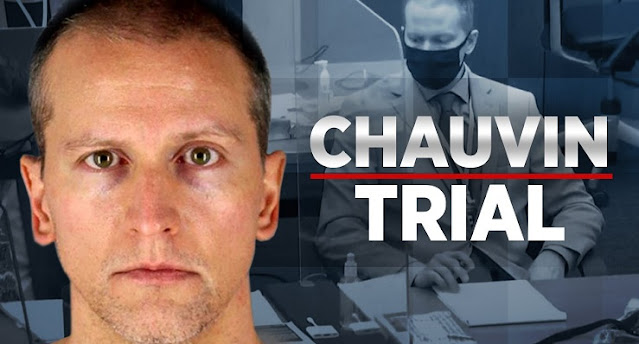 The third day in the trial for former Minneapolis police officer Derek Chauvin, who’s charged with the murder of George Floyd, featured new footage from inside the convenient store that’s at the center of the case as well as emotional testimony later in the day.
Gripping testimony has been a mainstay during the trial’s first three days, mostly centering around recollections given by eyewitnesses who watched Chauvin kneel on Floyd’s neck for roughly nine minutes before Floyd’s death.
Graphic cellphone footage of the fatal arrest, which was recorded by multiple bystanders who have testified, has also been a constant.
Many of the witnesses who have spoken have expressed survivor’s guilt, saying how they wished they could’ve done more to help Floyd.
Cup Foods
The morning revolved around footage from Cup Foods, the Minneapolis convenience store on the corner of 38th Street and Chicago Avenue where Floyd was put into custody by police.
It was the jury’s first glimpse at the events that led to the police being called to the intersection and ultimately to Floyd’s death.
The footage was shown during the testimony of 19-year-old Christopher Martin, who was working as a cashier the night of May 25, 2020, and was the person who sold Floyd a pack of cigarettes.
Right away, Martin said he could tell that there was something off about the $20 bill that Floyd used to pay.
“I noticed it had a blue pigment to it, kind of like a $100 bill would have,” Martin told the court. “I found that odd. I assumed that it was fake," Martin said.
On two different occasions, Martin and his co-workers approached Floyd’s vehicle across the street in an attempt to get Floyd or one of the two other passengers in the car to come back into the store and use real money but to no avail.
Martin said that he told his manager he was willing to pay for the fake $20 bill from his own paycheck after he approached Floyd’s vehicle the first time, noting that the store makes employees pay for counterfeit bills that they accept from customers.
However, his manager insisted that Martin return to Floyd’s vehicle a second time.
After Martin’s unsuccessful second attempt, Cup Foods called the police.
The teenage witness told prosecutor Steve Schleicher that he felt “disbelief and guilt” over what happened.
“If I would have just not taken the bill, this could have been avoided,” Martin said.
Overcome with emotion
After a lunch break, the court returned to hear the testimony of Charles McMillian, 61.
McMillian was also a bystander to Floyd’s arrest and can be heard in footage telling Floyd that he “can’t win.”
“The officer was, you know, trying to get him in the car and everything, talking to him. I was telling him ... ‘Just comply. Get in the car because you can't win,’ something to that nature,” McMillian said.
When prosecutor Erin Eldridge began to play the footage, McMillian became overwhelmed with emotion, crying as the video ended and becoming unable to speak.
“I feel helpless,” McMillian eventually told Eldridge. “I don't have a mama either. I understand him. My mom died June 25.”
Floyd can be heard calling for his deceased mother as Chauvin knelt on his neck. His mother, Larcenia "Cissy" Floyd, died in 2018.
McMillian’s visceral reaction to the video prompted Hennepin County District Judge Peter Cahill to call a 10-minute recess.
Chauvin defense attorney Eric Nelson declined to cross-examine McMillian.
McMillian isn’t the first witness to become choked up while testifying. Nearly all of Tuesday’s witnesses, the majority of whom were underage at the time of Floyd’s death, became emotional while recounting what they saw on the night of May 25.
The day’s session ended with the testimony of Minneapolis police officer Lt. James Rugel, who manages the department’s software systems and technology, including body cameras.
Body cam footage of Floyd’s arrest from Chauvin and the three other former officers who were on the scene was played during Rugel’s testimony.
However, Chauvin’s cam ended up under the squad car before he started kneeling on Floyd, something that Schleicher pointed out and Rugel confirmed.
National