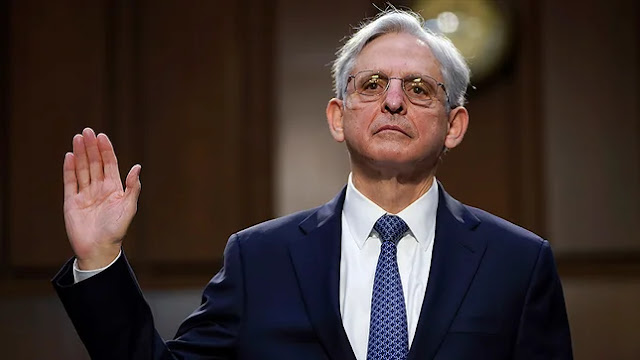 Merrick Garland's attorney general nomination is hitting GOP roadblocks that will likely delay his confirmation to lead the Justice Department until next week.
Sen. Tom Cotton (R-Ark.) — a member of the Judiciary Committee viewed as a potential 2024 contender — said on Wednesday that he is blocking an effort by Democrats to expedite Garland, whom they had hoped to confirm this week.
"Democrats are trying to expedite Judge Garland’s confirmation vote. I’m blocking them because Judge Garland has refused to answer basic questions, including whether illegally entering the country should remain a crime," Cotton said in a string of tweets explaining his opposition.
Under the Senate's rules, any one member can slow down a nomination and force Senate leadership to eat up days of time before a final vote.
Cotton pointed to a laundry list of issues where he said Garland's answers during his confirmation hearing last month had been inadequate including the death penalty, immigration and gun sales.
Cotton's disclosure of holding up Garland's nomination comes after Senate Judiciary Committee Chairman Dick Durbin (D-Ill.) said earlier Wednesday that efforts to speed up Garland's confirmation had hit a GOP objection.
"There was an objection to expediting his nomination," Durbin said from the Senate floor. "As a consequence, we face the Senate procedure which means it could be delays even into next week before he can take job."
Durbin told reporters early Wednesday evening that he did not know which GOP senator was objecting to Garland.
Garland is expected to be easily confirmed to lead the Justice Department, after advancing out the committee this week in a 15-7 vote.
Cotton along with GOP Sens. Mike Lee (Utah), Ted Cruz (Texas), Ben Sasse (Neb.), Josh Hawley (Mo.), John Kennedy (La.) and Marsha Blackburn (Tenn.) voted against his nomination in committee.
But Garland only needs 50 votes to be confirmed. No Democrat has said they will oppose him and he's picked up support from Republicans including Senate Minority Leader Mitch McConnell (Ky.) and Judiciary Committee ranking member Chuck Grassley (Iowa).
National