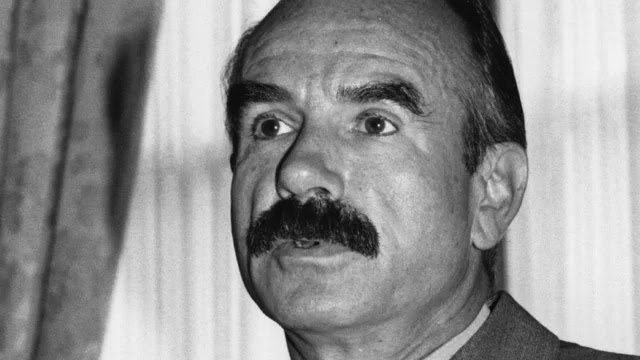 G. Gordon Liddy, the undercover operative best known for his role coordinating the Watergate break-in, died Tuesday. He was 90 years old.
His son, Thomas P. Liddy, confirmed his death to The Washington Post, adding that he passed away at his daughter’s home Fairfax County, Va.
While his son did not provide a specific cause of death, he did say that it was not related to COVID-19.
Liddy, an enigmatic figure whose career spanned from an FBI official and Congressional candidate to actor and radio talk show host, is best known for his failed plan under President Nixon to break into and bug into the Democratic Party's headquarters at the Watergate hotel.
As noted by the Post, Liddy worked for the Nixon-Agnew campaign and, in 1968, was awarded a post as special assistant to the secretary of the Treasury.
According to the Post, Liddy moved to a unit at the White House known as “the Plumbers,” which was tasked with combating leaks following the unauthorized release of the Pentagon Papers by military analyst Daniel Ellsberg.
Following the disbandment of the Plumbers, Liddy was transferred to the Committee to Reelect the President, widely known as CREEP, to organize intelligence activities against the Democrats.
It was in this role that Liddy organized the infamous Watergate break-in, tapping CREEP security chief James McCord to help with the bugging.
McCord, along with four Cubans, were arrested inside the Watergate in the early hours of June 17, 1972.
The arrest of McCord, whose links were easily traceable to the White House, quickly led investigators back to Liddy, along with fellow Watergate conspirator E. Howard Hunt.
Hunt, who passed away in 2007, once described Libby as “a wired, wisecracking extrovert who seemed as if he might be a candidate for decaffeinated coffee,” the Post noted.
A week after the break-in, Nixon himself complained to chief of staff H.R. Haldeman that Liddy “isn’t well screwed on, is he?”
Liddy, after refusing to testify at both the Watergate hearings and his own criminal trial, was sentenced to a 20-year prison term. This was later commuted by President Carter in 1977 after Liddy served just 52 months of his sentence.
The former Nixon associate went on to host the “G. Gordon Liddy Show,” a far-right radio program carried by more than 270 stations across the country.
The Los Angeles Times noted Tuesday that Liddy seemed to wear the Watergate crime “like a badge of courage,” driving a Volvo with the personalized license plate “H2OGATE,” and later taking on villainous roles on TV shows like “Miami Vice” and “MacGyver.”
Liddy repeatedly noted that the only regret he had from the Watergate break-in is that it was not successful.
The Times noted that he once said, “I was serving the president of the United States and I would do a Watergate again — but with a much better crew.”
National