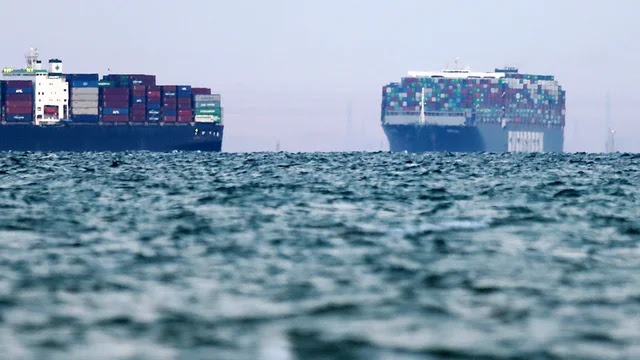 The first cargo ship has successfully passed through the entirety of the Suez Canal since the waterway reopened after a nearly-weeklong shutdown due to the grounding of the massive cargo vessel "Ever Given."
The New York Times reported that a Hong Kong-flagged cargo ship identified as the "YM Wish" was the first vessel allowed through the canal and exited the southern end headed for the port of Jeddah around 9:15 p.m. EDT in the U.S. It was headed to the Red Sea and Jedda, the Saudi Arabian port city.
A ship tracking website, MarineTraffic.com, counted numerous ships traveling through the canal Monday evening following the YM Wish's successful voyage.
The Suez had been closed since last Tuesday after the Ever Given became grounded in the waterway at a perpendicular angle, successfully blocking traffic in both directions. Workers in tugboats, dredgers and excavators labored for nearly a week to free the vessel, which was finally refloated early Monday with the help of a higher-than usual high tide.
A Navy spokesperson acknowledged on Sunday that the growing backlog of vessels and the canal's closure was having an unspecified impact on U.S. Naval efforts, while an analysis first reported by CNBC last week estimated that $400 million in global trade was being delayed every hour that the Suez was closed.
World