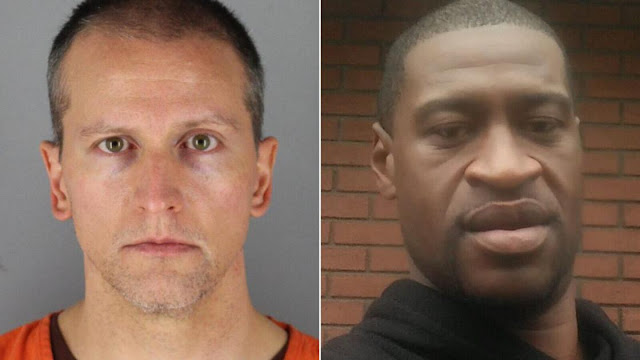 The second day of the Derek Chauvin trial was dominated for the most part by a handful of eyewitnesses who recounted wrenching details of what they observed on the night of May 25, 2020 in the Powderhorn neighborhood on Minneapolis.
Four of the witnesses who testified were kept off camera as they were all minors when George Floyd was killed that day, though two of them are now 18.
Two of the witnesses who testified Tuesday were the bystanders who captured the viral graphic footage of Chauvin kneeling on Floyd’s neck for roughly nine minutes.
This resulted in the wrenching recordings, in which Floyd can be heard pleading with Chauvin that he couldn’t breathe, ultimately becoming unresponsive while Chauvin continued to kneel on his neck.
“Blood choke”
Tuesday’s proceedings began with the continuation of Monday’s last witness, 33-year-old Donald Williams who has a background in both wrestling and mixed martial arts.
Before court adjourned on day one, Williams got through part of his testimony, telling prosecutor Steve Schleicher that Chauvin had Floyd in a “blood choke.”
“Blood choke” is a less formal name for a carotid hold — a chokehold that cuts off blood supply from the brain by placing pressure on either or both sides of a person’s neck where the carotid arteries are located.
In footage, Williams can be heard hurling insults at Chauvin and former officer Tou Thou who was also on the scene.
Defense attorney Eric Nelson during his cross-examination of Williams played a recording of a 911 call that he made following the fatal incident.
“He just pretty much killed this guy that wasn’t resisting arrest,” Williams is heard telling the dispatcher.
Williams told the court he made the call because he believed he had “witnessed a murder.”
He also pushed back against Nelson’s line of questioning multiple times.
“You can't paint me as angry,” Williams responded when Nelson asked if Williams grew increasingly angry during the situation.
Nelson also tried to assert that Williams’ name-calling of Chauvin and Thou became “more and more angry.”
“Would you agree with that?” Nelson questioned.
“They grew more and more pleading for life,” Williams countered.
The defense forced to play defense
Nelson passed on cross-examining some of the younger witnesses, resulting in much of the afternoon belonging to the prosecution.
The younger witnesses all presented powerful testimony.
“[Paramedics] asked him nicely to get off of him,” but Chauvin “still stayed on him,” 9-year-old Judeah Reynolds told the court in her brief testimony.
“I was sad and kind of mad and it felt like it was stopping his breathing and it was hurting him,” Reynolds added.
Alyssa Funari, 18, one of the bystanders who took footage of the incident, said that she felt “emotionally numb” after watching the events play out.
“I was upset because there was nothing that we could do as bystanders except watch them take this man's life in front of our eyes,” she added.
Nelson did cross-examine 18-year-olds Darnella Frazier — Reynolds’ cousin — and Alyssa Funari. Both were 17 at the time of Floyd’s death and recorded cellphone footage of the situation.
While being cross-examined by Nelson, Frazier said that the situation had changed her life.
“When I look at George Floyd I look at, look at my dad. I look at my brothers, cousins, uncles, because they are all Black. I have a Black father, I have a Black brother, I have Black friends. And I look at that and I look at how that could have been one of them,” Frazier told the court later in her testimony.
Frazier and many of the other witnesses appeared emotional while giving their testimony.
Genevieve Hansen, 27, the last witness of the day and a Minneapolis firefighter, had to take a moment before answering a question from the prosecution.
Later, when being cross-examined by Nelson, Hansen responded: "I don't know if you've seen anybody be killed, but it's upsetting."
Hansen’s response prompted Hennepin County District Judge Peter Cahill to caution to only answer what Nelson was asking.
National