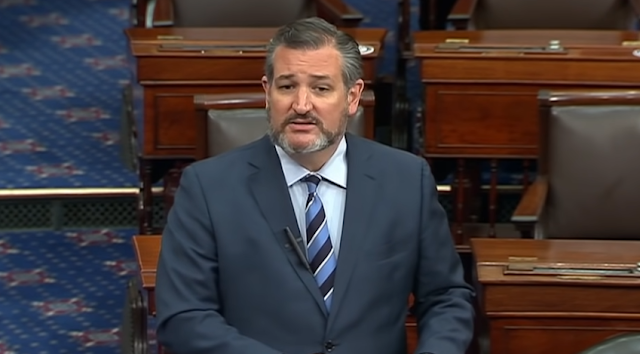 Texas Sen. Ted Cruz (R) on Tuesday accused Democrats of playing “ridiculous theater” by proposing universal background checks and other reforms following mass shootings, which he claimed would take “away guns from law-abiding citizens.”
Cruz’s remarks came during a Senate Judiciary Committee hearing on gun violence, that was scheduled ahead of the deadly mass shootings at massage parlors in the Atlanta area last week and at a Boulder, Colo., grocery store Monday evening.
The congressman argued that lawmakers should be working to prevent guns from getting into the hands of criminals instead of targeting firearms.
“Every time there’s a shooting, we play this ridiculous theater where this committee gets together and proposes a bunch of laws that would do nothing to stop these murders,” Cruz argued.
He then responded to earlier remarks from Sen. Richard Blumenthal (D-Conn.), who claimed that “thoughts and prayers are all we have heard from my colleagues on the other side” following mass shootings, rather than specific policy proposals to address gun violence.
“The senator from Connecticut knows that is false, and he knows that’s false, because Sen. [Chuck] Grassley [R-Iowa] and I together introduced legislation … targeted at violent criminals, targeted at felons, targeted at fugitives, targeted at those with serious mental disease to stop them from getting firearms and put them in prison when they try to illegally buy guns.”
The Grassley-Cruz amendment, or the Protecting Communities and Preserving the Second Amendment Act, was first proposed in 2013 and reintroduced in 2019.
It would require agencies to submit accurate records to the National Instant Criminal Background Check System (NICS) in order to prevent people with criminal backgrounds from obtaining firearms.
“What happens in this committee after every mass shooting is Democrats propose taking away guns from law-abiding citizens, because that’s their political objective,” Cruz said on Tuesday.
“But what they propose, not only does it not reduce crime, it makes it worse,” he added.
Meanwhile, Democrats on the committee pushed for more stringent restrictions on firearms. California Sen. Dianne Feinstein (D) called for Boulder to reinstate an assault weapons ban blocked by a court 10 days before the grocery store shooting on Monday that left 10 people dead, including an officer responding to the attack.
Cruz later Tuesday morning faced scrutiny after he seemingly left the hearing to appear in an interview with Fox News’s Harris Faulkner.
Faulkner, instead of questioning Cruz on the gun violence hearing or the recent mass shootings, asked the GOP senator to comment on Vice President Harris recently letting out a laugh when responding to a reporter’s question on if she planned to visit the U.S.-Mexico border amid the ongoing surge in migrants.
Harris paused before responding, "Not today," and laughed with reporters. The vice president then added, "I have before and I'm sure I will again."
Texas